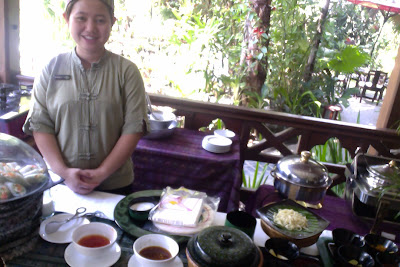 Today we decided to take it easy and have a leisurely breakfast mid-morning just before the buffet closed. And I’m still having breakfast as I type this out. Then afterwards, I’m thinking of renting a car and driver and checking out some of the cutting-edge galleries that are starting to sprout around the city.

We’ve set dinner tonight at Myanmar’s best French restaurant, recommended to me initially by the Ambassador of Switzerland in Manila, with dining in the garden and some of the most innovative Continental cooking in this part of the world. 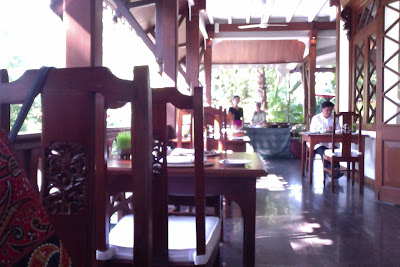 Breakfast on the terrace
But for now I’m having breakfast on the terrace of my beautiful hotel with a musician playing a traditional Burmese instrument in the garden. It’s rather nice and soothing, and the perfect accompaniment to a morning that’s neither cool nor hot, and a garden abundant with greenery. 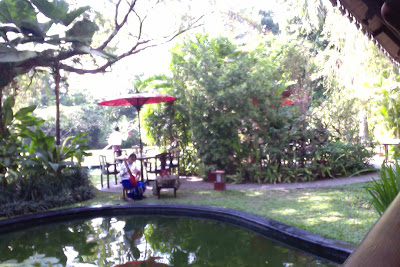 That’s the background music at breakfast
What’s a Burmese breakfast like, you may be wondering. 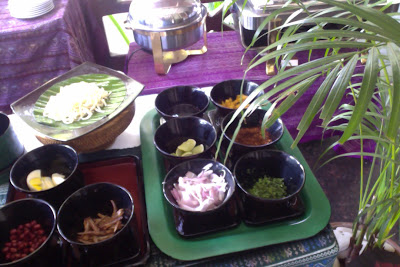 Condiments for a Burmese breakfast
Well, for the past mornings, I’ve been going local and having a fish and vegetable soup that Burmese have for breakfast and for just about any time of day, when they need a picker upper. It’s called mohinga, and the type of mohinga depends on who’s cooking.
At the Governor’s Residence, the mohinga is thick and full of herbs, and they serve it with egg, coriander and a type of crunchy corn that gives it lots of depth. I liked mohinga from the first morning I had it here in Myanmar, and I’ve been having it ever since. 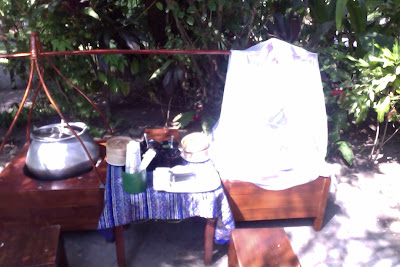 That’s the mohinga-making station in the garden
They also have some sort of congee, which is served with dried salted fish and peanuts. I make my own version by asking them to put lots of coriander and a squeeze of lime as well.
Another staple in my daily breakfast fare here is a big slice of gooey Rebluchon cheese which I drip all over my croissant. It’s absolutely delicious, and today I had two servings just for good measure. One of the waitresses then came up to me a little while ago and said: “You really like Myanmar cheese?”

It was more a statement than a question. But I looked at her with askance. “Myanmar cheese?” I asked. She nodded happily. “All those cheese are made in Myanmar.”
Who would have thought? I’ve been eating French cheeses forever and I certainly would never have labeled this as anything else but a proper French cheese. This certainly added to the many surprises on this trip.
Happily, too, the Governor’s Residence serves fresh carrot juice, which I have in Manila as well. So you might say that I’m feeling pretty at home here in Myanmar. Have a wonderful day, wherever in the world you happen to be.
The Governor’s Residence
The Orient-Express Group
www.orient-express.com
ON SALE EVERYWHERE NOW