Brunch on board the Blue Train of South Africa, from Pretoria to Cape Town via Kimberley in the Northern Cape 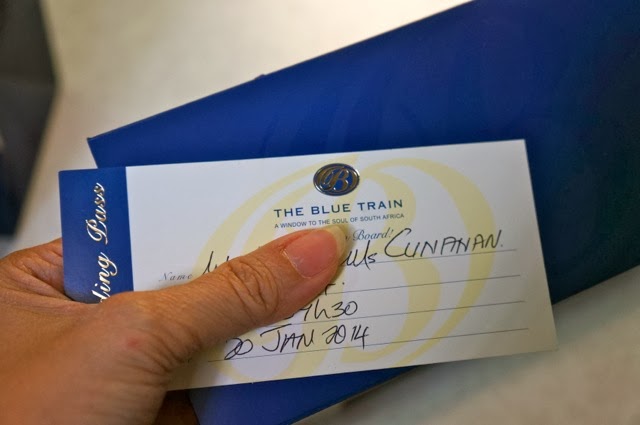 It’s been two years since I rode the Blue Train across South Africa, from the capital of Pretoria to the beautiful city of Cape Town, living a #Travelife.

Nevertheless, I still remember every moment of it, from the excitement of arriving at the old-fashioned train station of Pretoria to the fancy brunches and dinners onboard the train, to sitting in the viewing carriage at the end of the Blue Train to marvel at the loveliness of this part of the world.

TAKING THE BLUE TRAIN
FROM PRETORIA TO CAPETOWN

On the day of departure, we woke up early at our hotel in Johannesburg to take a car to Pretoria to catch the Blue Train to Cape Town.

The distance between Johannesburg and Cape Town is about 1600 kilometers, and by airplane, from Johannesburg airport, which is the nearest airport for Pretoria, it will take you just under two hours.

ALL ABOUT THE JOURNEY

However, by the Blue Train, it takes about 30 hours to travel from Pretoria to Cape Town or vice versa, passing through almost the entire length of the wild and remote Northern Cape.

But the journey is the experience in itself.

In fact, it’s an experience like no other — especially in this modern age when everything is instant and people are so impatient to get to their destinations as quickly as possible.

On the Blue Train, it’s all about the voyage, and the people you meet, and the things you see outside your windows as you travel across South Africa at a leisurely pace, just like in the old days.

It was a wonderful way to see a country I’ve grown to love. 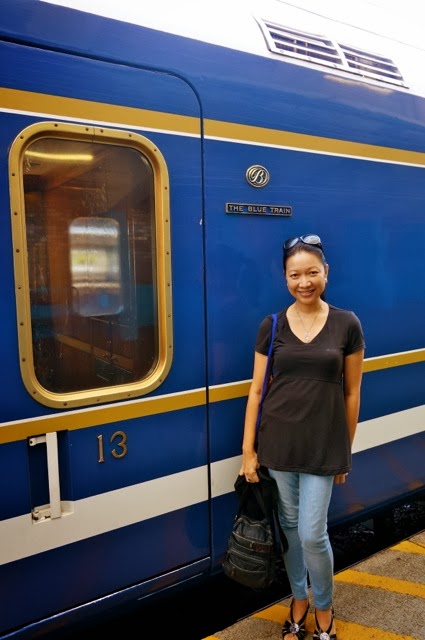 I’ve been on several luxury trains before, so I’m quite used to the configurations for these old-fashioned carriages. None of them are spacious enough compared to a hotel suite, for instance, but the luxurious ones are good enough.

And I have to say that the Blue Train is among the most comfortable trains of this class. 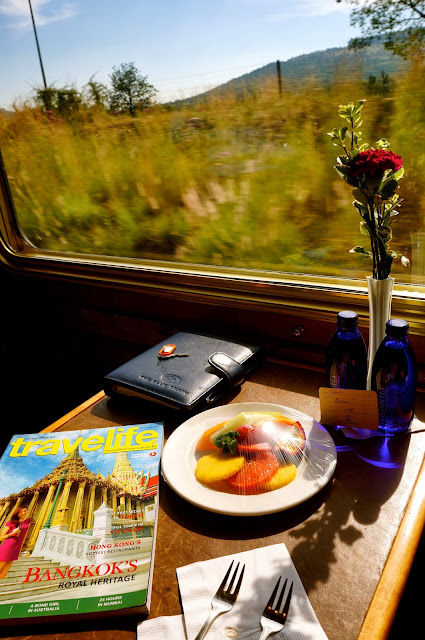 The cabins are spacious, the beds are heavenly, and the ensuite bathrooms are positively palatial by train standards.

IT’S THE COMPANY THAT MATTERS

The company onboard is the other attraction.

You really meet very interesting people as most people who take the Blue Train are very experienced travelers with lots of stories to tell. 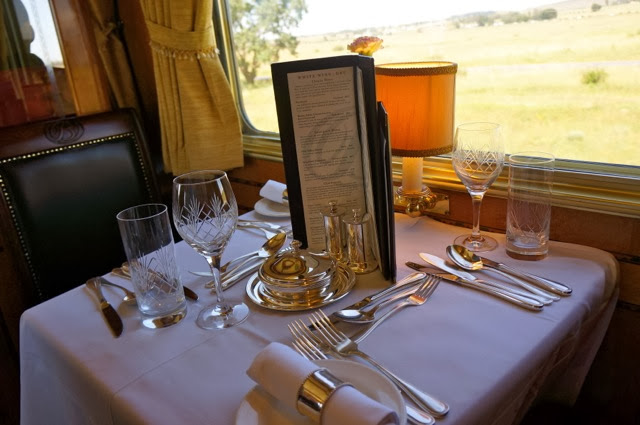 We met so many nice people on this train.

In fact, we sat next to one British couple by chance at the very first meal — and we liked them so much that we arranged to sit with them at every meal.

BRUNCH ONBOARD
THE BLUE TRAIN 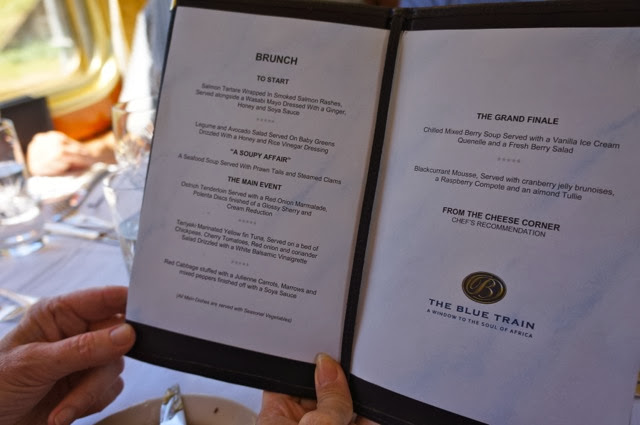 This is what brunch was like on that first day, by the way, as we rolled out of Pretoria and past Johannesburg, on our way to the Northern Cape, living a #Travelife. 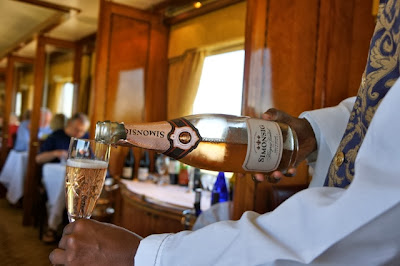 Then, anyone who wanted pastries or fruit could have some, as it was brunch.

Within the rather strict confines of this luxury train, a fruit and pastry buffet had been set up very nicely on one side of the Blue Train and passengers could just help themselves after enjoying a glass of bubbly. 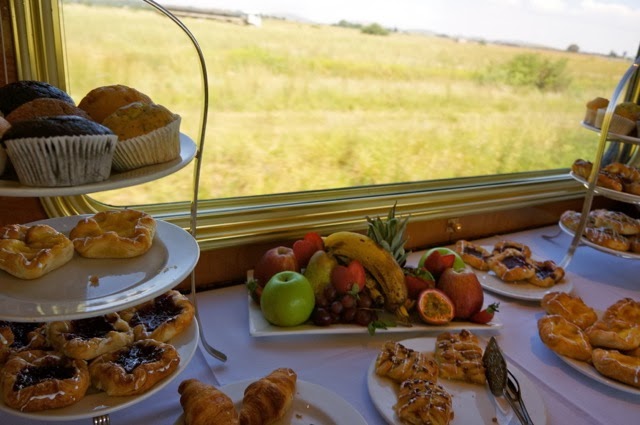 For an appetizer, there were several choices but most of us chose the smoked salmon. It was a very nice way to start brunch and an omen of good things to come. 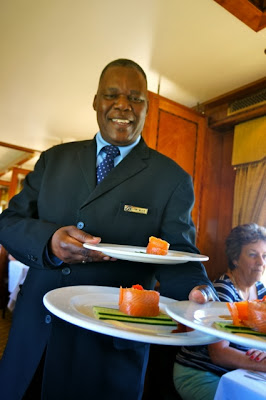 For the main course, almost everyone around me chose a meat dish. They served rack of lamb, and also exotic fare like grilled springbok.
However, I decided to ask the chef to give me a salad with more smoked salmon on the side instead as we’d been having one big meal after another in Johannesburg — and I was very happy with this salad. 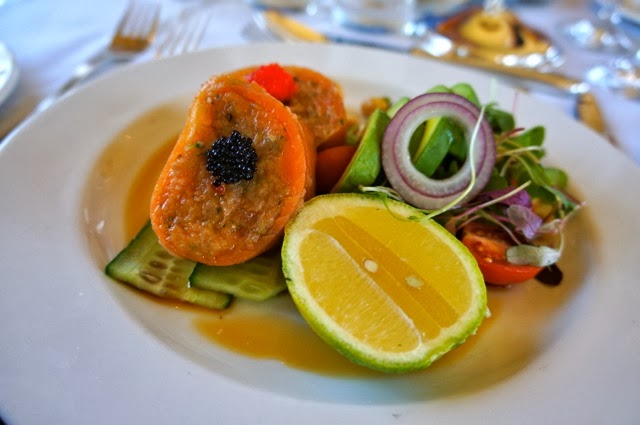 Dessert was beautiful as well.
It was hard to imagine that this full-course meal was created in a tiny kitchen of a moving train, and then served on porcelain, accompanied by silverware. This is a testament to the talents of the chef, as well as his dexterity.
The kitchen was as large as a big cabinet of a large restaurant, after all. 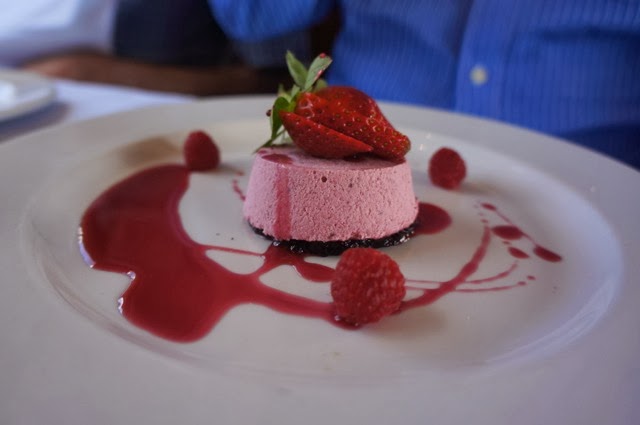 We enjoyed our conversations with this British couple so much that the result was that our table took the full course at each meal and lingered on way past everyone else had left.

We literally took hours to eat every meal, and happily so. 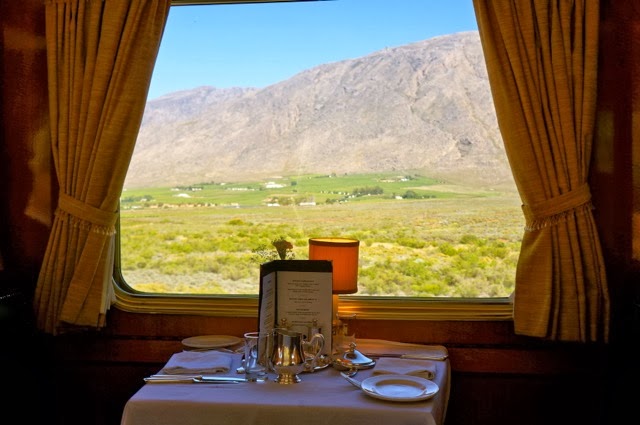 We were easily doing three hours for each meal, accompanied by lots of good food and wonderful wines, journeying across South Africa, and living a never-ending, and never-endingly eventful Travelife.