Lunch with a hot young chef

One morning on a two-week trip to the Czech Republic, we drove via a beautiful green forest from the UNESCO World Heritage town of Kutna Hora in the Czech Republic to another famous Czech town. Cesky Krumlov is a UNESCO World Heritage Site near the Austrian border. Our driver took us via mountain roads and the most beautiful countryside for two hours to the 15th century town of Tabor, about two hours away.

Here we stopped right at the top of the hill, in the town square, to have lunch at Tabor’s (and the entire region’s) best restaurant, Goldie, at the Hotel Nautilus right on the square itself. 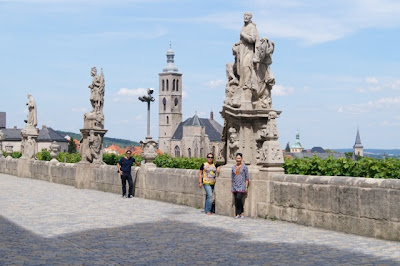 Goldie is the very stylish restaurant of the four-star boutique Hotel Nautilus, and it’s claim to fame is that it’s run by a young, handsome and charming Czech chef who has won many culinary prizes for his prowess. 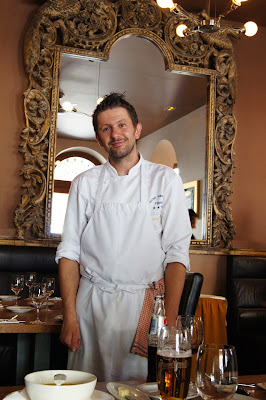 The restaurant itself is very nicely done up with simple furniture and modern artworks – just the right kind of atmosphere for the most elegant restaurant in this part of the country. Martin came out to welcome us and to talk us through his menu of Czech specialties and Western meals.

Of course we wanted to try the local specialties as we can have award-winning Western meals everywhere else in the world – and here at Goldie, the Czech specialties are rabbit, duck and trout, all locally sourced and personally prepared by Martin himself.

A and I ordered the duck while S had the rabbit, which is supposed to be the restaurant’s piece de resistance. And to start, we tried Martin’s fresh mushroom soup.

Martin told us about his mushroom soup: “That’s my grandmother’s recipe. I’ve been doing it with a slightly different version here in this restaurant for the last eight years.”

The mushrooms had been picked fresh. Have I told you how Czechs just love wandering into forests and picking mushrooms for a fresh meal at lunch and dinner? It seems to be a well-loved past-time here. Even our guide talks about mushroom-picking everytime we drive through a forest – and one of these days she’s promised to stop in a forest and give us a basic lesson on mushroom picking.

Martin’s version of mushroom soup was very nice, but heavy on the cream. I usually like mine lighter, but this was indeed very good. I asked him what he put in it, and he said: “Chicken stock, cream, celery root and a whole lot of other vegetables.”

CABBAGE WITH EVERY MEAL

After the main course, Martin took us to his spotless kitchen to see how everything is prepared. He had two large vats of soup stock boiling, and he said this would be boiling for about two days. One pot had duck bones and duck meat in it, while the other had beef and vegetables. I almost couldn’t believe that these would go just to soup stock — they certainly looked good enough to eat. 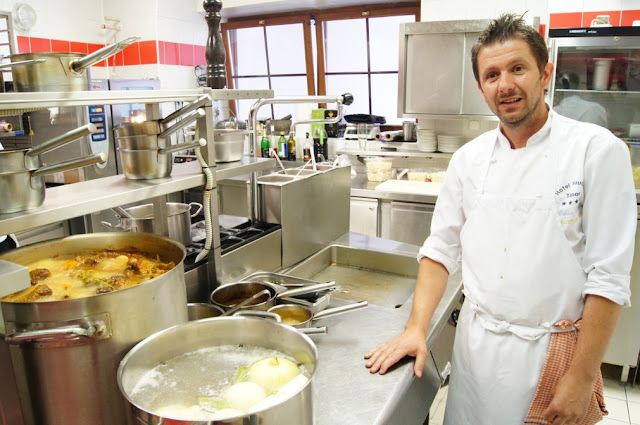 We also watched him prepare our desserts. I’ve been quite good about desserts on this trip, and usually I’ve only had a little bit after dinner. But as the food so far had been very good, I declared to everyone that I was having my own dessert. So I ordered Martin’s favorite chocolate ball dessert which came with mascarpone cream and ice cream.

We all declared that this was the best meal so far in 2.5 days of eating in the Czech Republic, although I must point out that everyday we’ve had very good food so far for dinner as well.

THE BEST OF CZECH FOOD

I’ve deliberately stuck to Czech food for this trip although we’re trying everything from the fanciest places in the country to provincial taverns in the middle of nowhere. My only requirement is that they be “best of breed,” meaning the very best meal wherever we are. It doesn’t matter what kind of restaurants they are as long as we get to have very good food. 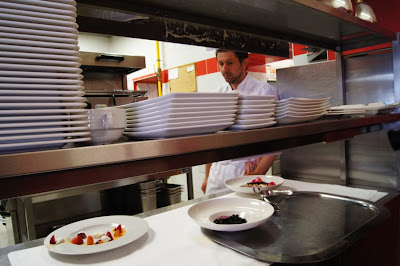 This was certainly one of my most memorable meals over countless visits to the Czech Republic to unearth its wonderful food culture.