A champagne of a trip — or a trip of champagne 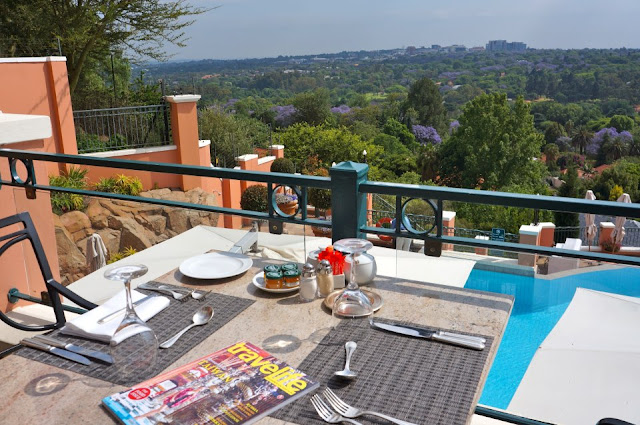 On Saturday morning, we landed very early in Johannesburg on a flight from Hong Kong. Everything was smooth and seamless, as a TRAVELIFE usually is.

Our friendly driver from the Westcliff Hotel, Johannesburg’s iconic and well-loved hotel, was at the arrivals lounge with a big sign bearing the name of The Boss.

Within minutes we were in the car, on the highway and proceeding towards the Westcliff via some of the most beautiful neighborhoods in Johannesburg.

When we got to the Westcliff, our rooms were ready and so we took a golf cart to Building #2, which is one of the highest buildings on the Westcliff estate and with a beautiful view.

THE GRAND DAME OF JOHANNESBURG 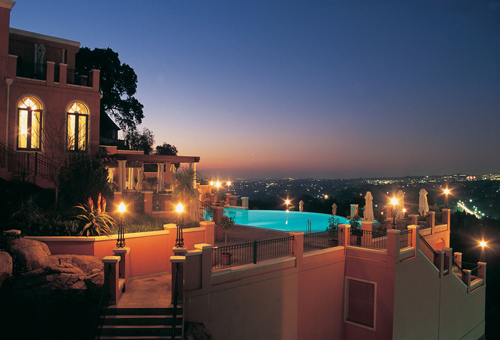 The Westcliff has long been Johannesburg’s grand dame of a hotel, famous for its picturesque surroundings and for its very palatial environment. All the rooms are housed in pink buildings on this hilly estate, and you need a golf cart to get around because it’s so large.

But that just adds to its charm, as it’s like entering a very special world, even when you’re just going from the reception building to your room.

A SUITE WITH A VIEW 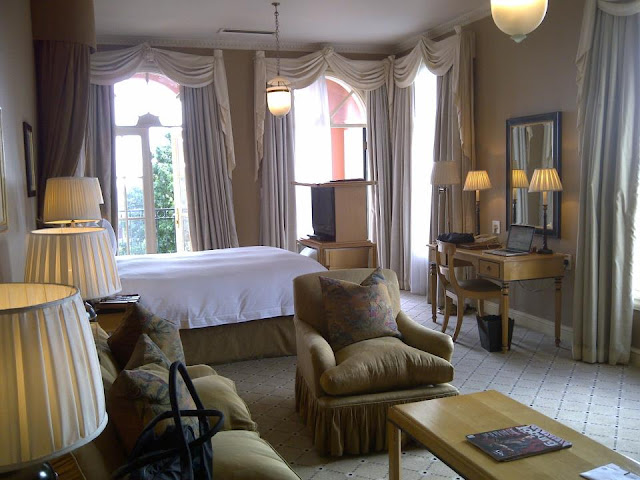 I loved my corner suite which had windows opening on all sides, and a large terrace with tables and a view that I spent too little time in, as we also wanted to see as much of Johannesburg as possible.

But when I first entered my suite, I flung open the terrace doors and went outside to take in the view of greenery and blooming jacaranda trees.

Wow, I told myself. I’m finally in South Africa.

Inside, my suite was decorated in a very classic style, with comfortable furnishings and the kind of details and lovely touches that the Orient Express Hotels group is famous for, the world over.

I had lovely flowers in my room and all kinds of original organic African toiletries in the bathroom. Everything was carefully thought over.

The television, for example, was hidden inside a console cabinet where I could place my books and my gadgets in the daytime. And just before sleeping, if I wanted to watch TV, all I had to do was push a button and the console would rise and the TV would appear magically in front of my bed.

THE BEST PLACE AT SUNSET IN JOBURG 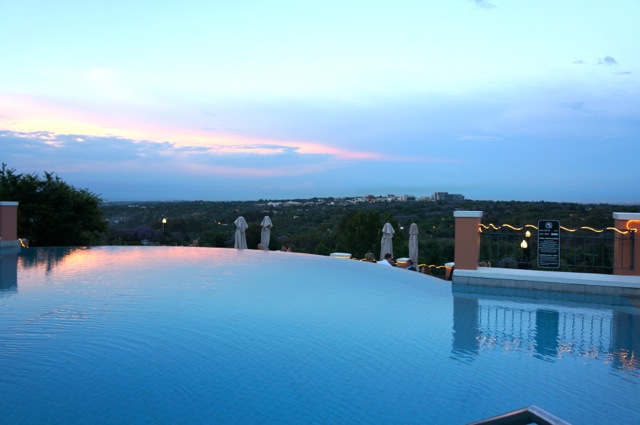 That very day, after a full eight hours or so of going all over Johannesburg, The Boss and I had champagne by the infinity pool at sunset with the hotel general manager.


What a lovely place this is to pass the sunset hour as you can see the sky turn orange and pink in front of you, while you are surrounded by greenery and peace. I was completely captivated by this, and it was very enjoyable to sit here talking over glasses and glasses of champagne.
I don’t know why but we’ve been in South Africa for just over 56 hours now – less than three days, really – but already it’s felt like a month.

I’m sure The Boss will say this is because of the company, as he’s been feeding me with interesting information about life in the bush ever since we set foot here. 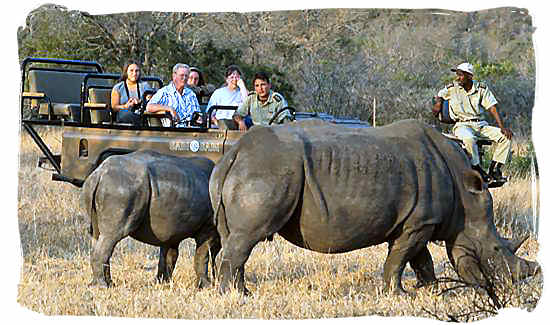 From him, I’ve learned the most useful information that I’m sure will be very handy for life in Manila: like what to do in case you bump into a raging elephant, how not to stand between a hippo and the water, and which side of a zebra to stand next to.

I asked him a couple of times: “Where on earth do you get all this information?”

Then I teased him: “Did you buy some safari handbook and read up on it before the trip, just to impress me?”

We were both in South Africa for the first time, after all. And on safari at the Sabi Sabi, one of the top game reserves and safari experiences in South Africa and in the world, for the very first time as well.

With his usual confidence about everything in the world, he replied: “Stock knowledge. Intuitive information 101.“

Not in my world. So I replied: “Obviously we went to different schools.” No need to tell you which school was better. 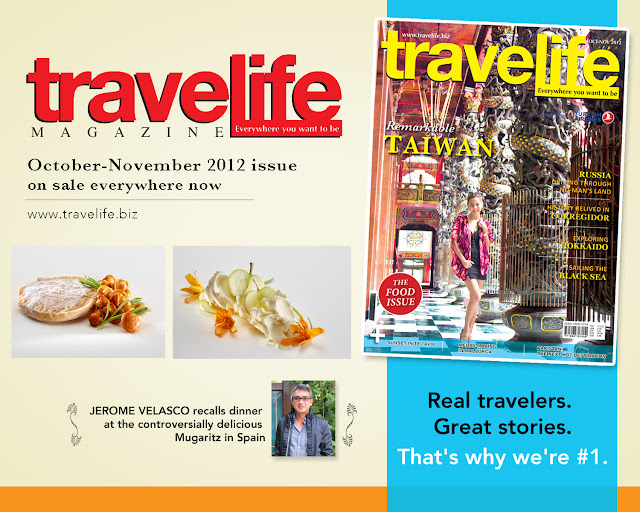 But anyway, The Boss does sound so convincing about his Safari 101 knowledge, that earlier a ranger overhearing our conversation in the jeep actually asked him how many times he’d been on safari since he seemed to know everything already.

No need to tell you what happened after that. Of course, The Boss gave me a big I-told-you-so look. 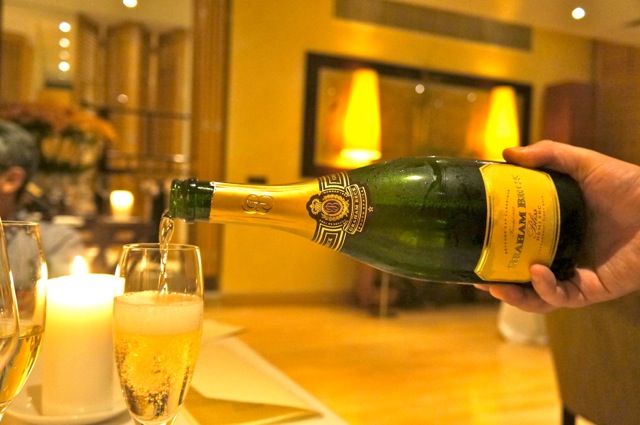 By the way, I’ve lost track of how many glasses of champagne we’ve had, but I’m certain we’ve had a lot. And if I think about all that awaits us in the Cape Town area as well next week, I’m so sure that this is just an inkling of things to come. 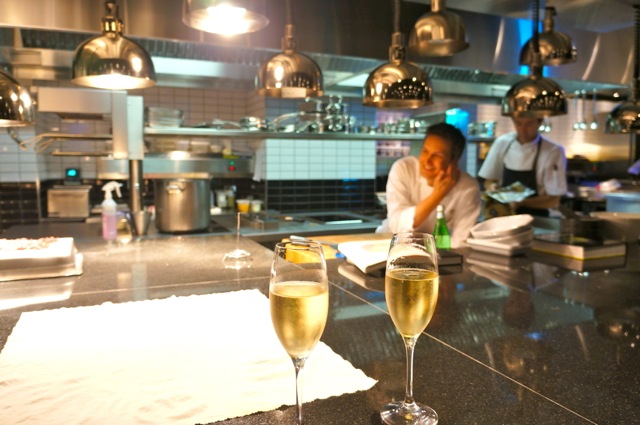 Is it me wanting champagne on our pretty amazing trip around South Africa? Or do South Africans just enjoy champagne so much and we’re just going along for the ride?

We’ve started and ended every evening so far with champagne. We had champagne after our hot-air balloon ride as well. And even on safari, in the middle of absolutely nowhere, we’re having champagne at sunset every single day. But of course, we’re at the luxurious Sabi Sabi, so here champagne at sunset is almost de rigeur.

Either way, I’m not complaining. It’s certainly a fantastic way to end every day in a never-endingly, and never-endingly eventful Travelife.