Zebra skins and one of my favorite lunches in South Africa

Over two weeks in South Africa, we literally ate in the best restaurants in the country. We also had the pleasure of meeting top chefs and having many talented chefs personally cook meals for us.

Every single meal we had was enjoyable, interesting and delicious as we journeyed across the country, from Johannesburg and Sabi Sabi in the North all the way down to the Cape Town area.

Interestingly, when I was asked about my two favorite lunches during our trip, off the top of my head I thought of two of the unlikeliest choices. This doesn’t mean I didn’t like the fancy meals, as I so enjoyed them all.

But in about ten seconds I answered that my two favorite meals were a club sandwich at a semi-fastfood joint at Johannesburg’s domestic airport, while killing time and waiting for our flight to Cape Town; and a very spontaneous run-in into a steakhouse restaurant along the waterfront of Cape Town after a morning of sightseeing.

We’d found ourselves one day in the waterfront area of Cape Town after spending the morning at Robbens Island, visiting the maximum security prison where Nelson Mandela, Jacob Zuma and a host of African National Committee (ANC) leaders were once held. 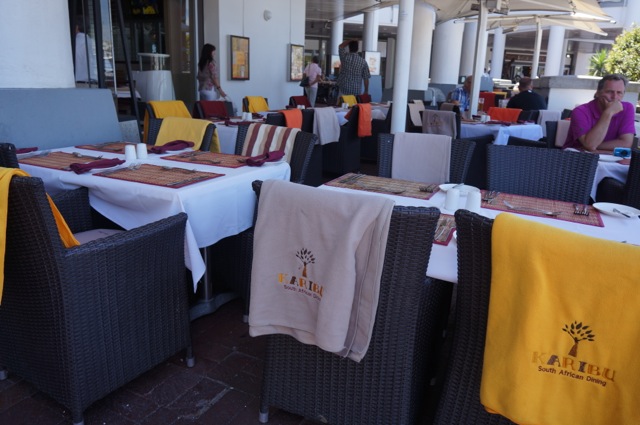 It was just after lunch when we reached the mainland, and instead of returning to our hotel for lunch, we’d decided to do the very touristy thing and look for a decent restaurant along the waterfront.

There are many nice restaurants in this area, I’m sure; but we hadn’t done our homework, and many of them did look like tourist traps — the kind that serve barely edible seafood to clients they know will never be back for seconds because they’re only in Cape Town for two days.

I had in my mind to have some fish as well, because we were by the waterfront, and to get in some oysters if I could. Simply because I love oysters.

CUT ABOVE THE REST

But then we passed a rather formal-looking restaurant — or at least it looked more formal than the others so far — named Belthazar’s, making us both automatically think it was a play on the name of the famous New York brasserie. There was probably no significance to the name at all, but that’s what made us think about having lunch here.

Actually, it was I who was more enthusiastic, as I’d passed their restaurant store front and read signs everywhere saying they were the best steakhouse in Cape Town. The signs were posted by them, of course, but it certainly made everything look more convincing.

They also had a serious biltong bar (biltong is the local equivalent of beef jerky), a heavy duty aging room for steaks, and one of the most impressive wine dispenser counters I’ve seen for a restaurant of this size and stature. It certainly didn’t seem to be your typical tourist trap. 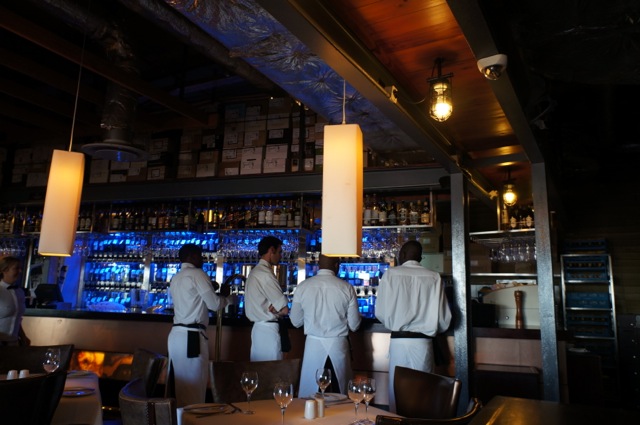 Then the clincher was the fact that they had dry aged beef — and I order this whenever and wherever I can, simply because it’s so hard to find except in certain cities in the world.

I had in mind the great and super tasty dry aged beef I used to fly 14+ hours and spend two weeks in New York for, in another lifetime when I had more time and energy for long flights at a drop of a hat.

THE BEST STEAKS IN THE WORLD

In New York, I used to always order a big steak and eat half, and then bring the remaining half back to my hotel.

The New York Palace was “home” then, and my suite had a kitchen and a proper dining room. And my idea of bliss was to cook garlic fried rice and refry the leftover steak in just a little fat, and have this for breakfast the next morning at the hotel.

I did this with almost every steak I ordered in New York — no fail. And I don’t go to New York a lot anymore, but I always order dry aged steak whenever I find it on the menu somewhere in the world, hoping to replicate those juicy steaks I used to have in Manhattan. So far, not so good.

Anyway, back to our very nice lunch at the waterfront in Cape Town.

Our waitress recommended a nice avocado and shrimp starter, and then we shared a 500 gram T-Bone steak that was dry aged, as a main, with creamed spinach and fries.

Again, it was really I who wanted to have this dry aged beef and this was the only cut they had for dry aged beef, unfortunately, and it was just too big for one person to order.

The Boss was nice enough to agree to share this T-Bone steak with me even if he doesn’t really like T-Bone cuts — and perhaps this kindness is why I have such a nice memory of this lunch.

Everything was good and I liked my steak especially with the red wine sauce that came with it.

SAVE THE BEST FOR LAST

Taste-wise, so many other lunches we had were far better. But for some reason, it’s my memory of this lunch that made it so enjoyable for me — and this went beyond dissecting the taste of the food.

And perhaps the best part was yet to come. We stumbled upon a crafts store after lunch that sold prized zebra skins, and so far at a price lower than any we had come across so far. We hadn’t really had much time to shop in our rather crazy schedule, so it was a stroke of luck to find this store.

Coincidentally, they had two zebra skins of roughly the same size and quality, and for exactly the same price. These weren’t cheap, but they weren’t crazy expensive either. So we each bought one as a memory of our two weeks in beautiful South Africa.

And perhaps it’s also a memory of my favorite lunch.