The Retreat in the Selous of Tanzania. One of the most special safari experiences in the world.

So yesterday morning, when I woke up, there was a very nice message forwarded to me from our online team, from a Belgian couple I had met while on safari at The Retreat in Tanzania last October.

“Very nice review and so true,” they wrote. “Really a magical place.“

There were only two other couples at The Retreat when we were there, and this Belgian couple was one of the two. We had a very nice time talking to them.

The Retreat is a very private place in the most middle of nowhere possible, so you won’t get hordes of safari goers here. In fact, Steffi Graff and Andre Agassi had just stayed at The Retreat before we got there, apparently.

I’m sure they had a great holiday sans paparazzi.

MAKING SURE HE GETS IT

Remembering The Retreat prompted me to look at some of my photos again. Then I sent one of the photos to the Travel Companion, to remind him of this wonderful trip, as we’d been exchanging messages by BBM and email yesterday afternoon.

In fact, I deliberately sent the photo simultaneously to all three of his email accounts.

His only reply was: “You sent this to all of my emails?” I’ll bet he was his usual incredulous self when he sent this message to me.

Not one to mince words, I told him: “Yup. So that way you get the photo instantly on your phone. Then you also get it later on your iPad, and finally you’ll have a copy forever in your Cloud account.”

MY MOST SPECIAL SAFARI EXPERIENCE
FOR 2013 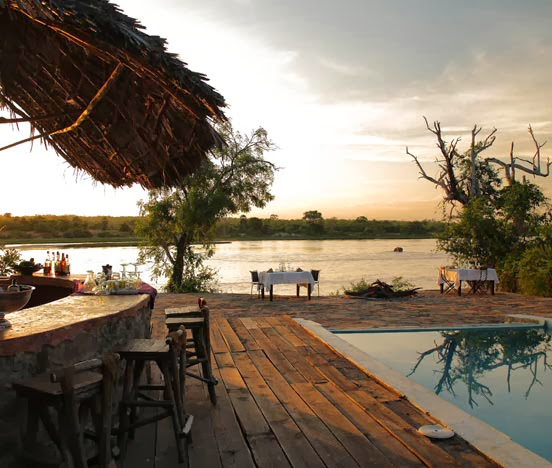 Our three-night stay at The Retreat, an environment-friendly lodge located at the edge of the Selous, which is the largest wildlife area in Africa, was truly special.

Whenever I see the photos, I just can’t help thinking so. In fact, I wish I’d appreciated it way more then, than I do now, especially as it’ll be awhile before I get that way again.

The Selous is often referred to as the last bastion of wilderness in Africa.

That’s certainly saying a lot, considering the entire Africa is an area of wilderness. 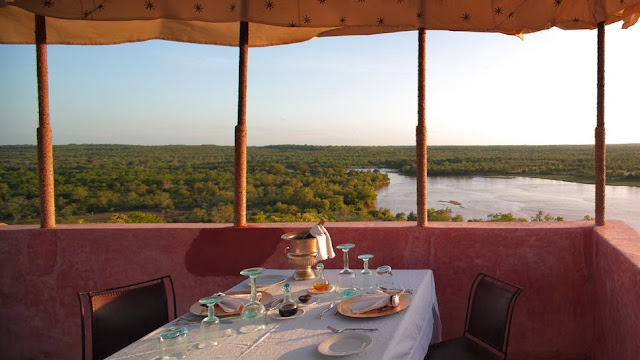 And within this, The Retreat is one of the most beautiful and luxurious safari lodges in the Selous. There is only one other lodge in these parts that is in the same category.
But The Retreat is more remote and more special than the other place. It’s truly a unique lodge in such a unique place. 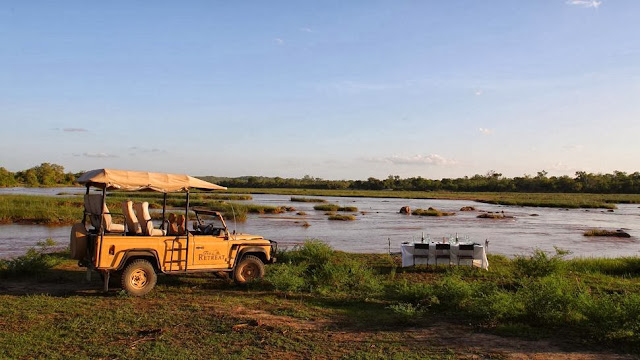 To get to The Retreat, we flew to Dar es Salaam, which is the largest city in Tanzania, and then we took one of these tiny airplanes to nowhere.
Nowhere, meaning The Selous, the last bastion of wilderness in the entire Africa, as I’ve already written above.
A SAFARI UNLIKE ANY OTHER
Our stay here also coincided with my birthday, so in a way it was doubly memorable.
This is the safari experience as almost no one will ever experience it – and I honestly cannot think of a more appropriate place to spend  a birthday, for someone on a never-endingly eventful Travelife. 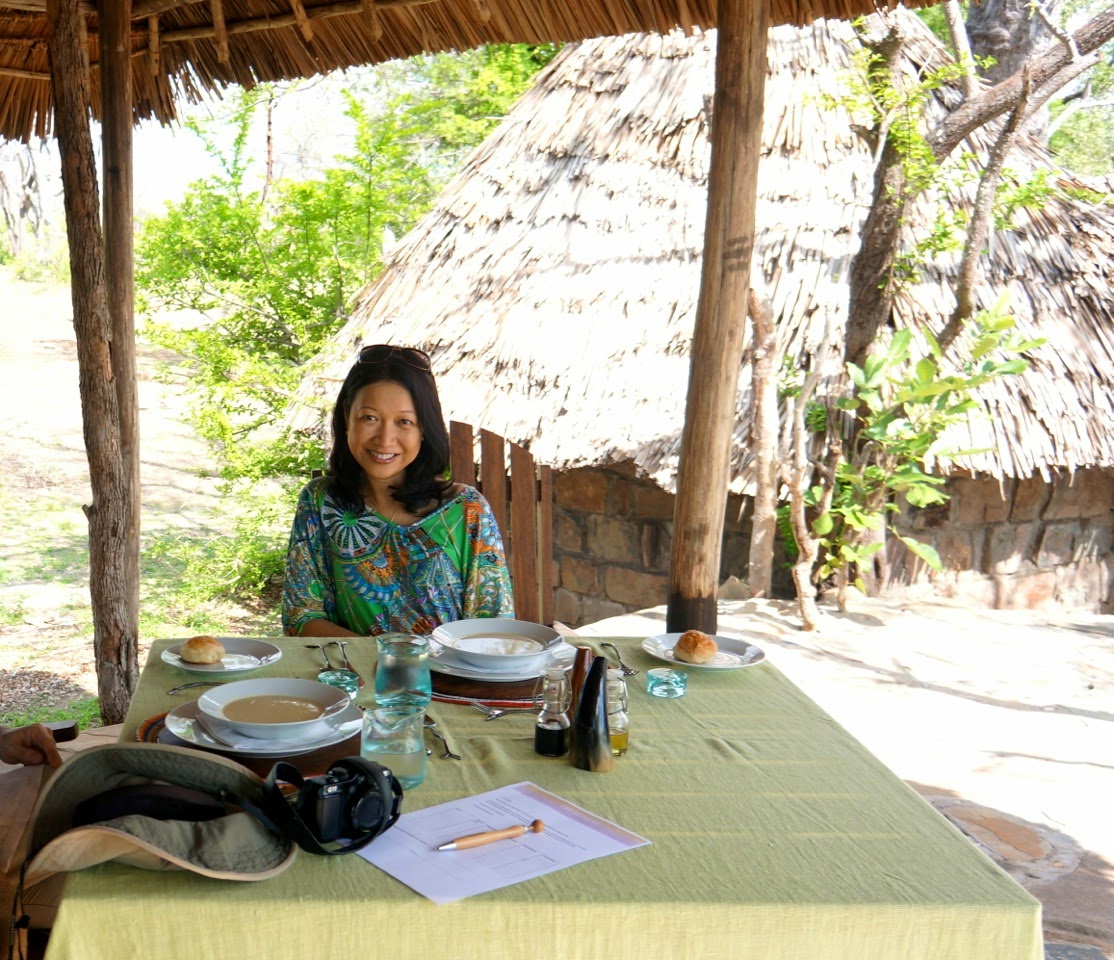 DOUBLE THE SIZE OF SWITZERLAND 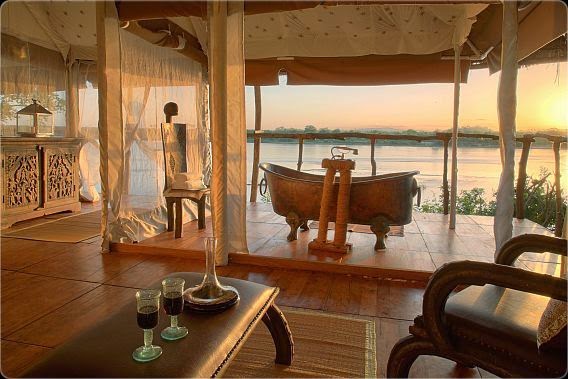 We had no WiFi or mobile signal for the most part, save for when we had lunch at the main house each day.

So lunch was prime googling time for him, and blogging time for me. We would sit on the rooftop of the main house and we would both have our iPads out until the food was served.

I usually bring my Macbook Pro on trips, but I switched to the iPad for this trip to Tanzania, as we had a very strict weight limit on those tiny safari airplanes.
THE FARTHEST CORNER OF NOWHERE
We were in the very farthest corner of it, as well, so the nearest village is about 100 kilometers away on rough dirt road that becomes unpassable in the rainy season.
You get the picture, I hope.
We were literally in the middle of nowhere.
A VERY SPECIAL LODGE
The safari lodge was really very special.
It’s for people who’ve been there and done that, or for celebrities who want to get away from it all.
Or for those who just want one of the most unique experiences you’ll probably ever get in a lifetime.
LOVELY AND RUSTIC

We were booked in the best villas in the lodge, called The Hippo Point, and it’s really lovely in a rustic way. This is also where Steffi Graff and Andre Agassi stayed.
The more I think about this stay, the more I appreciate how special it was.

Scroll down to read more about The Retreat in Tanzania… 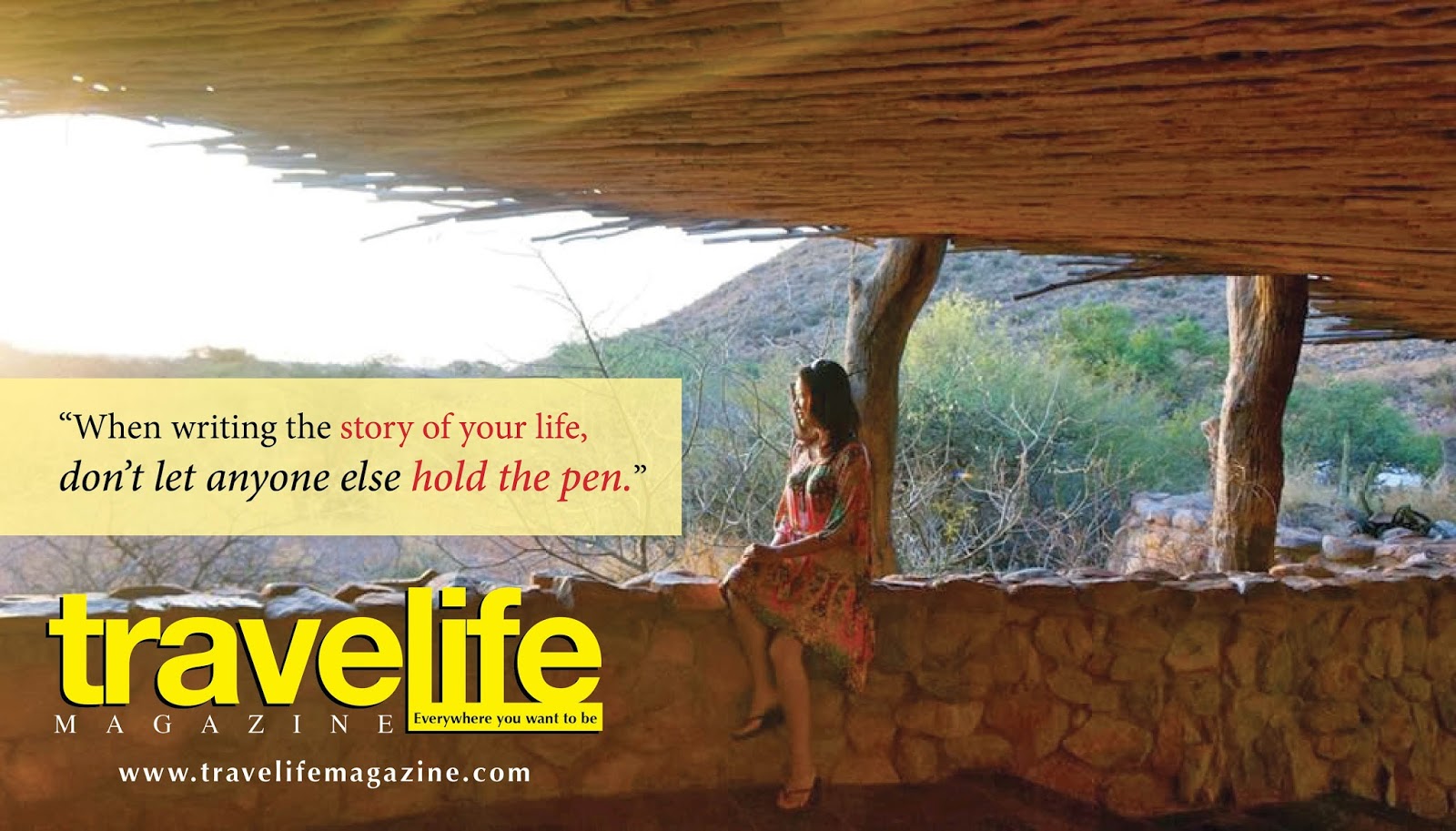 If you’re used to the five-star deluxe hotel experience, this probably isn’t first for you as it’s not a Hollywood-set type of safari lodge with a polished butler at your beck and call.

But considering where we are — meaning in the middle of nowhere — it was a truly surreal and luxurious experience. 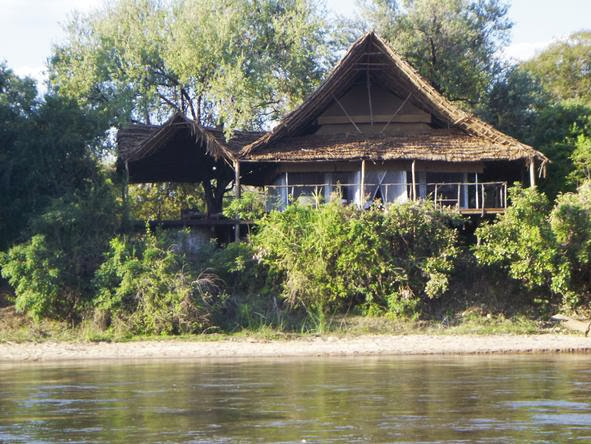 Hippo Point is the best option at The Retreat, and Steffi Graff and Andre Agassi  reportedly loved it.
This is perfect for celebrities because it’s just you and the animals.

Try getting the paparazzi in there.

WINE, CHAMPAGNE AND HIPPOS
On our first night, the lodge’s six guests had wine and champagne right by the river, with a hundred hippos and a couple of crocs in attendance.
There was a full–fledged fantastic set-up, and there we were with only two other couples.
A HONEYMOON IN THE SELOUS
This couple from Belgium, had been here on their honeymoon just in June.
And then they were were back again for a longer stay just a few months later.
They told us: “We’ve been everywhere in Tanzania, but this is really special. This is really nature, and not a Hollywood set for guests paying stiff fees to see animals in the wild.”
On their honeymoon, they didn’t see much, but they loved the whole feeling of the lodge.
That day, the husband proudly showed us on his iPad the most amazing photos of 6 lions he’d seen, a beautiful leopard, and even a very large elephant by the swimming pool where we’d just had lunch.
Yes, an elephant had walked in on them while they were having lunch!
AN EXPERIENCE LIKE NO OTHER
So this is the Selous experience. One day you may see nothing, and another day you may see everything.
They don’t guarantee you the Big Five, but if you do happen to see a pride of lions walking around, you can almost be assure you’re going to be the only jeep oohing and aahing over it –– unlike in the more famous safari places elsewhere in Africa, such as Kenya’s Mara, where a pride of lions is bound to attract 20 jeeps from 10 safari lodges.
And there’s a jeep for every couple so you don’t need to share anything with strangers.
AFRICA AT ITS MOST PRISTINE
You just have to be in the right frame of mind for this.
This isn’t an Out of Africa experience, the way so many other luxury safari lodges are. This is Africa at it’s most unreserved and pristine.
Thinking about it now, it was truly a pure, undiluted safari experience.
Of course, there were some drawbacks.
SIMPLE BUT SIMPLY BEAUTIFUL 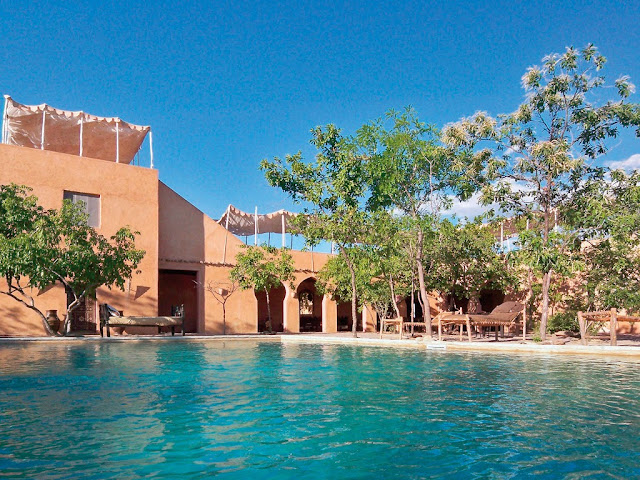 The lodge is beautiful, but it’s not a Hollywood period film set, the way some of the other top lodges are.
The service is also pretty simple, if you’re used to staying in some of the world’s best safari places. 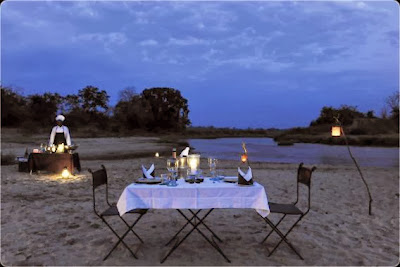 Food choices are also limited compared to other places we stayed in, because of the limitations of the location. Every single thing has to be flown in, and the nearest supermarket is only reachable by airplane. So don’t expect gourmet food, even if you do get multi-course meals served in a lovely setting.
But, in many ways, this was a Travelife at its best.
And I wouldn’t have exchanged this special experience for anywhere else in the world.
HAPPY BIRTHDAY TO ME 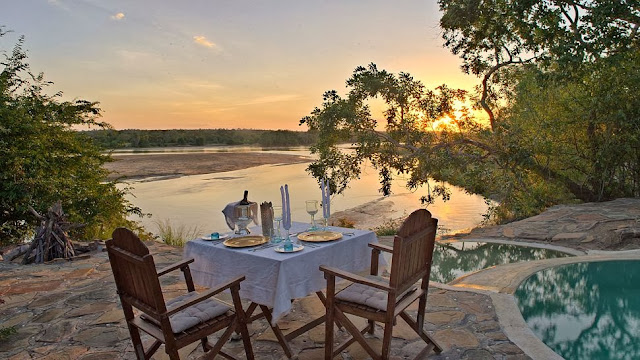 As for my birthday dinner, what a nice evening that was. And this is exactly where we had dinner.
I actually never pay attention to my birthday, in general, because everyday is a wonderful and special day in a never-ending Travelife.
I specifically asked the Travel Companion not to tell anyone at the lodge that it was my birthday, as I didn’t want any fuss. 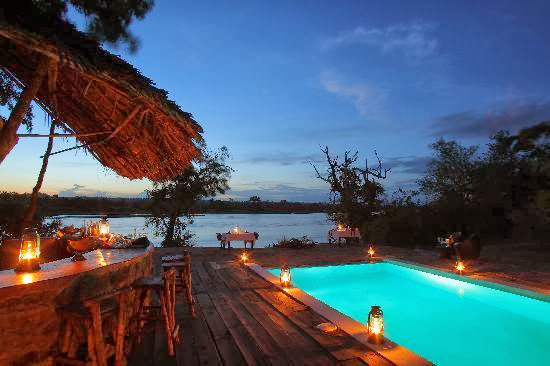 But the hotel staff arranged for cocktails and dinner by our private swimming pool, at the very edge of a place where about 100 hippos bathe, under the moonlight.
It was a full moon, too, so there was a pretty glow everywhere.
Not a bad way to turn another year older in a never-ending, and never-endingly eventful Travelife. 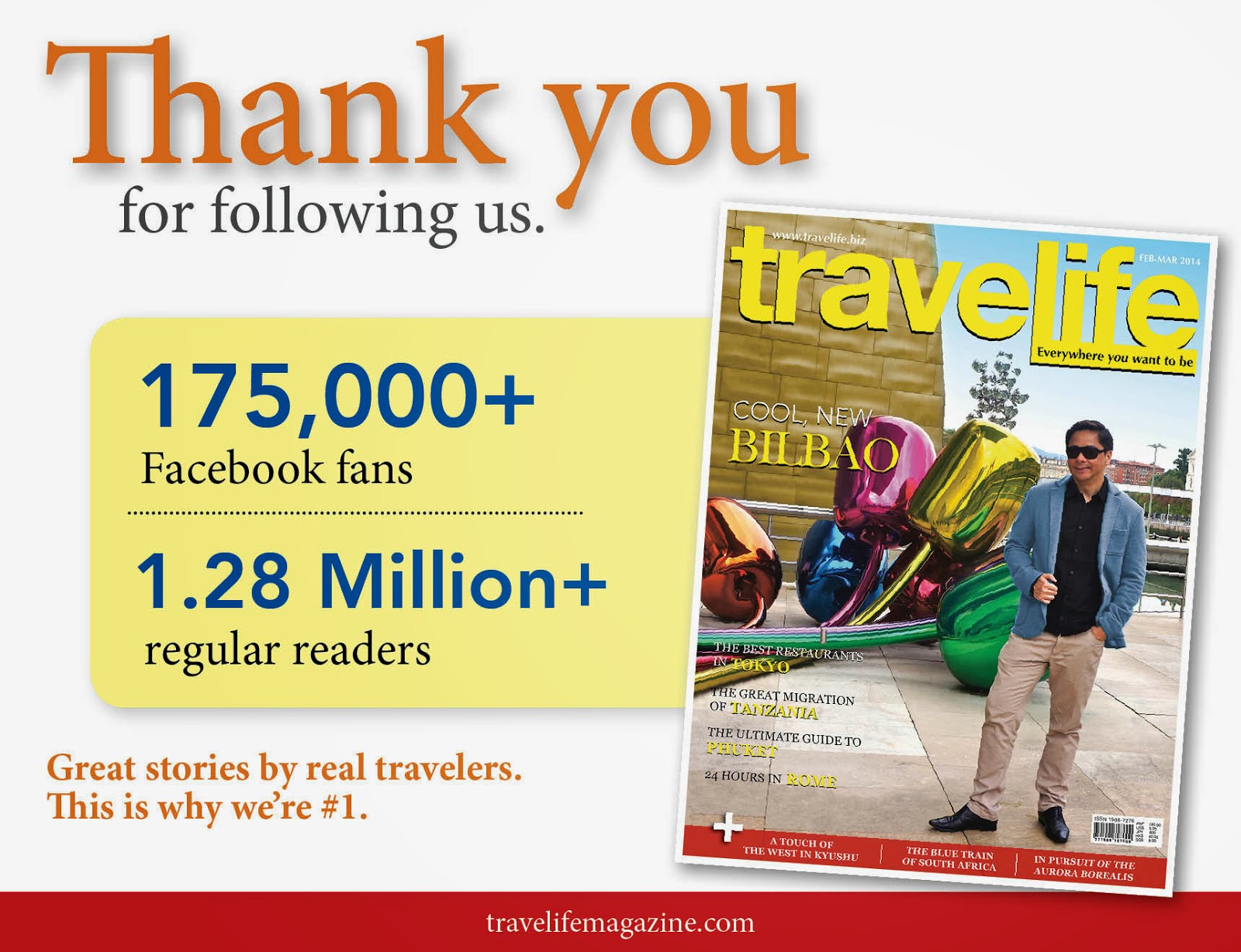