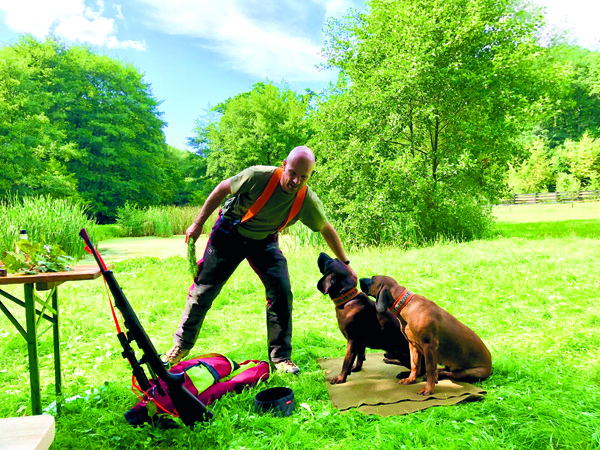 The German hunting dogs lay by our feet half asleep until they literally smelt blood. For our viewing benefit, their trainer had strategically placed chunks of meat along a trail that went around an empty clearing.

We’d just landed in Budapest that very morning, and already within a few hours we were were amidst mountains and forests about 50 kilometers from the town of Miskolc, the fourth largest city in Hungary.

As soon as the dogs’ noses caught a whiff of what awaited them, off they were in a flash faster than race cars in pursuit of their imagined prey.

The dark brown Hanover hounds raced through the mud and the tall grasses while we watched in amazement. Meanwhile, the trainer beamed with pride when his dogs approached him eagerly for approval.

“The younger one was recently attacked by a boar, and it was very serious,” he said, rubbing the head of the smaller and nimbler one. “I didn’t think he would make it. But he’s a fighter — this one. Look at how he ran.”

We were in the heart of hunting country in northeastern Hungary. Here, rifles and pistols are lavished with love like family heirlooms, and children grow up with the sound of guns. Sunday lunch at the country home is likely to be the venison that grandpapa shot the other day, doused with a sauce grandmama created with berries picked from the forest.

HOW TO COLLECT GUNS

In fact, just before lunch that day, our host had beckoned me up to the second floor of the private hunting lodge where we were all staying, to a room where he kept his guns. He showed me his collection, and one of them was particularly exquisite. It was long and heavy, made of German wood with a carved barrel of Turkish metal.

I took the gun from him, unloaded of course, and turned it upside down so that its intricate carvings shone in the sun.

“What are these?” I asked our host, a passionate hunter and the chairman of a firm of 50 lawyers in Budapest. He replied: “That’s actually my name. This is my favorite shotgun so I had my name carved on it.”

THE COUNTRY LIFE IN HUNGARY

Then, as if he could read the question long in my mind, he continued: “Hunting has long been part of life in Hungary. It is one of our great traditions. In fact, some of the most aristocratic families in Hungary have always been hunters.”

HISTORY OF HUNTING IN HUNGARY

It’s true. Even the much-loved Empress Elisabeth of the Austro-Hungarian Empire was a passionate hunter and horsewoman.

Hunting in Hungary is an all-encompassing lifestyle. This lifestyle includes the military-style clothing, the hours of tramping carefully through bushes on a late Saturday afternoon, and the animal heads hanging in the living room. The hearty meals are the icing on the cake — these are literally the fruits of one’s labors.

HUNGARIAN FOOD AT A HUNT

For example, lunch that day was at this same small hunting lodge so far away from any sign of city life that it was actually out of mobile phone range. Here we enjoyed the kind of heavy meal relished by those who live close to the ground.

We were only six, but there were platters of wild boar in a mushroom cream sauce and a heavy stew of mixed meats to start. We thought that was the end of the meal. But soon the cook was bringing out roast chicken, legs of duck and the ubiquitous venison with berries that seems to be everyone’s favorite dish.

Then there were the endless glasses of home-made palinka in different fruit flavors and the saucers of paprika across the table that one eats with everything — or even just as a snack with nothing at all.

The hunting life of Hungary is clearly not a life for the timid of heart or the weak of stomach. Lunch hadn’t even begun, for instance, and we’d already downed four different types of palinka, that heavy liquor beloved by all real Hungarians.

The one made from muscat grapes was my favorite because it had a sweet aroma. However this drink is at least 40% strong so even a small glass is potent. In fact, the countryfolk like to joke that even just a few drops will probably start a car in a pinch.

FLYING SAUCERS IN THE AIR

In the afternoon, we drove through the kind of magical forest I would have loved to meander around in while thinking about the poetry of Robert Frost. The leaves were the color of fresh green and recent rains gave everything an invigorating moisture so it was perfect for a walk.

But my stroll was not to be. A group of hunters was waiting for us in yet another forest clearing, eager to show off their marksmanship skills. Actually, this was just another Saturday afternoon exercise for them and they had kindly allowed us to join them in the shooting of hundreds of plates.

AN EXERCISE IN SHOOTING PLATES

Yes, plates. The gunners, all dressed in the customary khaki clothes, stood in a line and took turns aiming at plates that flew out of two machines placed at angles. Shooting even one plate down seemed an almost impossible task since these were being flung at perhaps 50 kilometers per hour, requiring gunners to be quick with the eye and even quicker on the draw.

The gunners, in the customary khaki clothes, stood in a line and took turns aiming at plates that flew out of two machines placed at angles. Shooting even one plate down seemed an almost impossible task since these were being flung at perhaps 50 kilometers per hour.

Nevertheless, most proved extremely skilled at what seemed like a most difficult past time of successfully aiming guns at one plate after another in the air without stopping for breath or blinking an eye.

AN AFTERNOON WITH THE GUNS

We spent about an hour with the guns. During this time I proved myself a hopeless shot vs the flying saucers. The machine was running out of plates, my shoulders ached and my spirits were down.

Fortunately, redemption came in the form of a caravan of trucks and SUVs filled with women and children, driving towards us in a line. With their arrival, the shooting began winding down but it was still far from quiet. However, neither the women nor the children seemed to mind the noise, dust or the general commotion of the guns and the broken plates.

This was just another weekend in the Hungarian countryside, after all. It was made just a little more special because it was a beautiful summer day and the women had brought an impromptu feast with them. They carried baskets of thick crusty bread, large vats of goulash, and cases of local wine which they set up on picnic tables under a large tree while the children played in a stream nearby.

Observing the scene, I realized that it was the aroma of goulash that finally prompted the men to put down their guns. Everyone wanted a steaming plate of goulash to be wiped clean with bread after all.

I was hungry too. So the next plate I finally held in my hands was not meant to be broken. When my turn at the picnic table came, I ladled some of that home-made country goulash that had lured the men away from their guns onto my plate.

Then I poured myself some good red wine from the town of Eger into a thick glass tumbler and sat on the grass where just several minutes earlier there had been an enthusiastic outpouring of bullets. The sun was setting and everything was quiet now in this beautiful part of Hungary. And life was absolutely perfect.

Read more about traveling around Hungary in Travelife Magazine.