The best sushi in Hokkaido, Japan, and it has a Michelin star and cheap prices 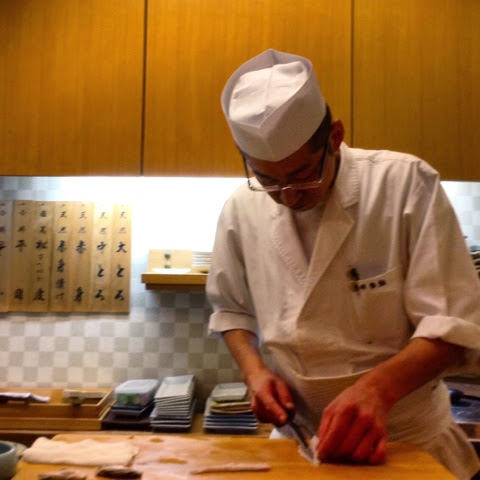 In Hokkaido on a hot springs and foodie holiday until last night, living a Travelife, we had so many wonderful and delicious meals.

This part of Japan is just full of fresh and incredibly high quality produce, so that it’s almost very hard  to find a bad meal there.

The Travel Companion left almost all the planning to me for this trip, unlike in our trips to Africa where I chose the hotels and he did his homework on other things.

But thankfully we have almost the same taste in everything Japanese, save for a world-famous innovative restaurant in Tokyo which he loved from his very first visit there, and which I’m not too impressed with.

But almost every visitor from Manila wants to eat at this world-famous restaurant he likes so much, so I’m stuck with eating here pretty regularly. It’s quite good food, but it’s way over-hyped, in my humble opinion.

NO IDEA WHERE WE WERE HEADED

Anyway, the Travel Companion made me laugh yesterday as we were driving back to Chitose Airport from a hot springs resort to catch our flight back to Tokyo. We’ve traveled a lot together — over 40 days in just short of the last two years, to be exact — but mostly it’s been to Africa, which we discovered almost on a whim.

So we already have a pattern for planning trips and traveling together, and so far it’s worked out rather well.

And as he was driving us back to the airport, he reminded me: “When I landed in Japan last weekend, I had no idea where we were staying or eating. Or even what kind of car we were renting.“

Of course he knows me well enough to understand that when I book a holiday trip for us, it’s always going to be best of breed.

A MICHELIN-STARRED SUSHI RESTAURANT
IN HOKKAIDO 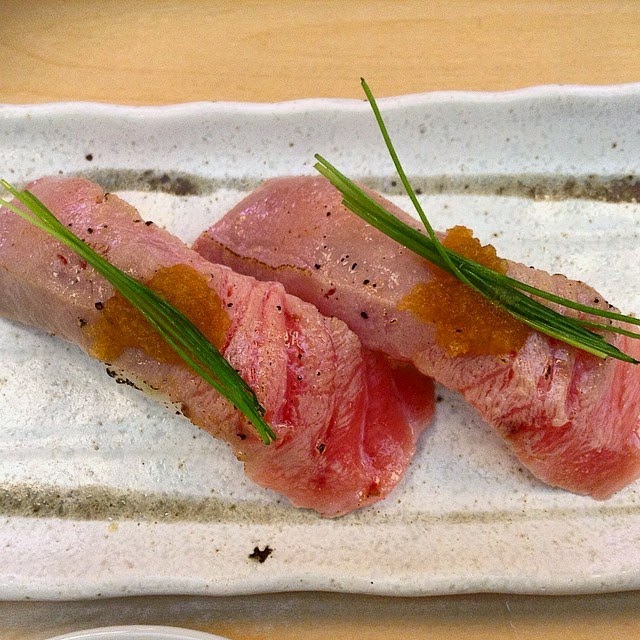 Well, the first place I’d booked for a meal upon arrival in Hokkaido was one of the island’s best sushi restaurants.

Of course, when you’re in Hokkaido, you must eat sushi, and so I’d booked a Michelin one-star sushi restaurant in the middle of nowhere.


This was my second choice, actually, as the only other highly rated sushi place — a Michelin two-star — is only open at night, making it impossible for us to visit from our hot springs resorts.

SUSHI IS PRICEY IN TOKYO 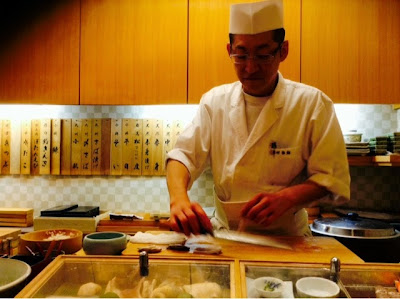 Really good sushi in Japan is quite expensive, but we knew that Hokkaido would certainly be cheaper than Tokyo.

Still, when we passed a completely nondescript soba restaurant near our sushi destination, after parking the car, I’d teased him: “You might want to take me there for lunch instead.”

Wouldn’t that be rather funny? For two pretty serious foodies to fly to Hokkaido, drive two hours to a town facing the Japan Sea, and to end up in a nondescript soba restaurant with plastic displays in the windows.

The prices at this nondescript soba restaurant were pretty attractive, though. A comprehensive soba set with tempura included cost something like 1200 yen, which comes up to US$12.

Not one to miss a beat, with his usual dry humour, he’d replied: “Well, if I took you to lunch there instead, I would sure save a bundle of cash.“

But of course, that wasn’t going to happen.

We were both psyched for really good sushi since Tokyo. In fact, for breakfast on the airplane, we’d shared a chocolate and banana pastry from Joel Robuchon just to be hungry for lunch. 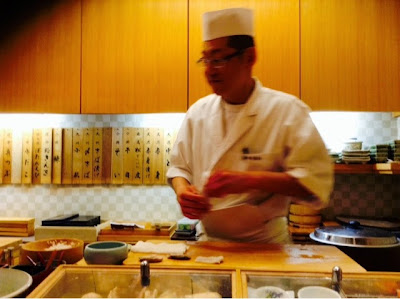 At this famous sushi restaurant, we ate about 19 pieces of truly good and fresh sushi each, which is really quite a lot of food. And neither of us can recall one piece out of those 19 that was just okay or ordinary.

In other words, we’d had 38 excellent pieces of sushi between us, and two bowls of miso soup.

A GUESSING GAME ON THE BILL

Just before the Travel Companion asked for the bill, we’d done a guessing game on how much our lunch would cost.

Both of us had the same guesstimate. US$200 for lunch, which would make it US$100 per person. And the Travel Companion had said that if this fantastic sushi lunch of 38 pieces of sushi for two would only cost him US$200, he would be a happy camper.

SHOCK OVER A SUSHI LUNCH BILL

When the bill came, I didn’t look at it at first.

But then I literally felt his shock, seated next to me at that sushi counter, and so I peeked at the bill just in case he was having to fork out US$500 for what we thought would be cheap-ish sushi for two in Hokkaido.

It turns out the bill was something like US$60 per person, which is really unheard of for what we ate at a Michelin-starred sushi restaurant in Japan.

The Travel Companion said, when he saw the bill: “I wondered whether this was the bill for the tea or  for the parking. Or maybe they were going to give you your own bill. That’s certainly the most delicious value-for-money sushi I have ever had in my life.”

As for me, it was one of the most enjoyable sushi lunches I’ve ever had in Hokkaido, living a never-ending, and never-endingly eventful Travelife.