Coffee with a Filipino in Franschhoek, South Africa

In South Africa for two weeks last month, living a TRAVELIFE, we visited the picturesque artist town of Franschhoek, which is about an hour’s drive from Cape Town.

The main motivations for visiting Franschhoek were to have dinner at Le Quartier Francais (LQF), one of South Africa’s best restaurants, and to stay at two very different but equally lovely hotels: Le Quartier Francais, which is part of the Relais & Chateaux group, and La Residence, which is one of the most amazing private hotels in Africa.

TWO BIRDS WITH ONE STONE

So you might say that we killed two birds with one stone. One of us was — well, actually, both of us were — so looking forward to a full-blown eight-course dinner at LQF, and these two hotels in Franschhoek were in my South Africa hotels bucket list.

From Cape Town airport, we got a car and drove ourselves to Franschhoek. We’d arranged to rent a very nice German car but the car company had loused up our reservations and they ended up giving us a Lexus instead.

This was pretty okay, especially as a Lexus is easy to drive, except that our new car came with the lousiest navigation system in the world. It probably needed a major software upgrade as it almost never took us to the right hotel or restaurant, in that week of driving around the Cape. 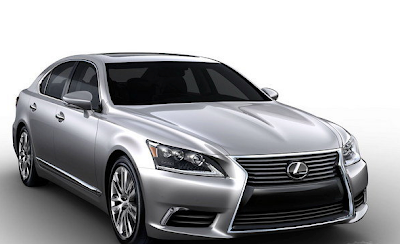 I often wanted to chuck this navigation system out the window when we found ourselves in some deserted road instead of in front of our hotel, as we were supposed to be  — especially as I was in charge of navigating.

Fortunately, I can read maps very well, so we never got lost in a major way. And that day we made it to LQF in Franschhoek in good time to relax a bit before dinner.

That night, we had a truly mindblowing degustation dinner, which you’ll read more about in an upcoming issue of Travelife Magazine.

ONE OF THE MOST BEAUTIFUL DAYS
IN SOUTH AFRICA

The next day was one of the most beautiful days of summer in South Africa.

After breakfast, we walked around town, going into shops and galleries, checking out animal skins, and even looking at real estate listings for properties in South Africa.


South Africa has no shortage of gorgeous homes and properties, and it fascinated and surprised us to learn how reasonable prices were compared to Manila.

We were expected at a famous winery for lunch with their managing director, so we didn’t have much time save for a short and quick walk up and down the main street. And just before checking out, we returned to Le Quartier Francais and met up with Lit Cortes, a fellow Filipino and the South Africa-based director of the safari specialists Asia to Africa, for a quick chat and a coffee.

Lit and I had been in touch for some months prior to our South Africa trip; and in the small world of Manila and its one-degree of separation, we had so many common friends, so it was simply a must for us to meet up with him somehow, while we were in Franschhoek. 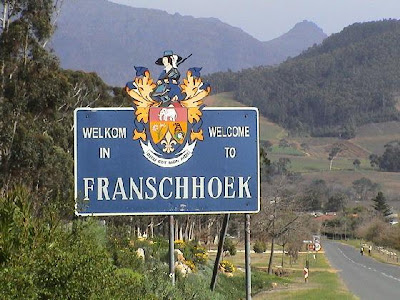 One of my friends said: “You can’t go to Franschhoek and not see Lit.”

Among the “Africa junkies” I know (and please note that I use this word in a positive way, as I now count myself among them), Lit’s home in Franschhoek is a necessary stopover for a meal or a bottle of wine, and everyone raves about how beautifully he and his wife Kitty have done up their home. 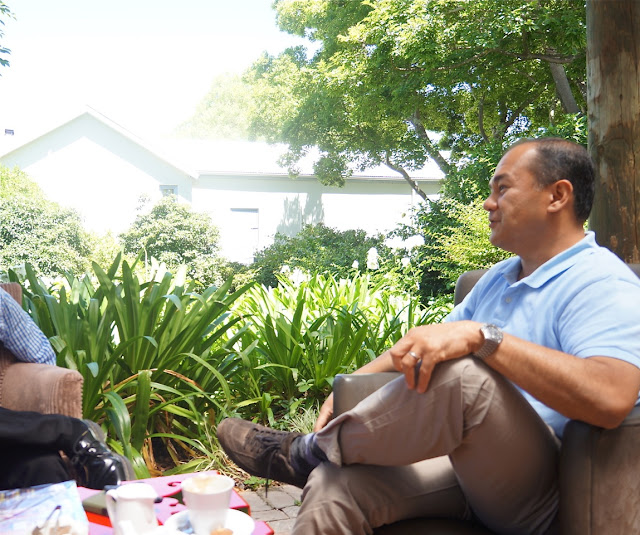 I wish we had more time so that we could have taken Lit up on his invite for a drink or a nightcap in his home, or a meal together somewhere.

In fact, I wish we’d had more time for everything — but all we had was a half-hour to catch up with him before another lunch in another destination in our never-endingly eventful Travelife.

More time just wasn’t possible as every meal on our itinerary was already spoken for. Finally, as we had to go and drive from Franschhoek to Somerset West with an unreliable navigation system, I very reluctantly said: “Next time.”

TIME WON’T GIVE ME TIME…

Anyway, that morning of that wonderful day, we sat out in the terrace of LQF, under the sun, discussing common friends in Manila and talking about South Africa.

“You definitely need more time in South Africa,” Lit had told us, and one of us had shrugged and said: “This was the max possible.” Yeah, it had been a real stretch to even get two weeks in our very busy lives, but fortunately everything had worked out nicely.

Even before we’d met him, it fascinated us no end that a Filipino would be living in Franschhoek — and this was one of the first questions I asked him when we finally met up.

“What’s it like, living over here?” I asked him. It’s undeniably a beautiful place, but I was interested in the aspects of real life in this part of the world, a place so far from reality as we know it.

“We love it here,” Lit said. And obviously, they lead a wonderful and pretty relaxed life.

When he isn’t working, Lit’s walking his two dogs along some of the most fantastic scenery in the world, and going on safari. Or sampling wines or heading for Cape Town, where the atmosphere is of course more cosmopolitan.

Friends have told me that when they go around Franschhoek with Lit and Kitty, the whole world knows them and it’s literally “Hi Lit,” or “Hi Kitty” everywhere.

I gave Lit also a rundown of all the hotels I’d chosen for this trip, and he seemed to know everyone running the ones in the Cape area, as well.

Later on, when we’d said goodbye to Lit and were on our way to lunch at Somerset West, in the car we’d talked about how surreal this morning was: there we were, three Filipinos with enough common friends to instantly be real friends, having coffee and rooibos tea in a garden terrace of a lovely hotel in a tiny town like Franschhoek at one end of Africa, which is really almost one end of the world.

It felt so comfortable, and yet it was so far from our reality.

We didn’t even know where we were. Of course it was South Africa; but it felt like Manila because we three were sitting around talking as if we were in a restaurant or a coffee shop at The Fort or somewhere in Makati.

Surreal, but nice, as Julia Roberts said in that movie “Notting Hill.” And just another day in our never-ending, and never-endingly eventful Travelife.