After a short but wonderful stay in Johannesburg, living a TRAVELIFE at the iconic Westcliff Hotel, we went on to the second part of our trip around South Africa — to the Sabi Sands in Greater Kruger National Park.

Here we’d booked a stay at the Sabi Sabi Game Reserve, one of the most luxurious safari experiences in the world.

HOW TO GET THERE?

At first, it was tussle trying to decide how to get there from Joburg.

But in the end we decided to take the small charter plane from a private hangar just off Joburg’s international airport. This took us straight to Sabi Sabi’s private airstrip in about 75 minutes.

After a lovely breakfast on the terrace of the Westcliff Hotel, the hotel car took us straight to the hangar.

I was surprised at how pretty and comfortable the hangar was.

It made me feel like I was already on a safari, as it had authentic safari decor and even a boutique selling safari-type clothes in case you didn’t bring white shirts and khakis and then you suddenly felt in an Out of Africa mood.

We sat in the lounge for a few minutes checking emails and drinking Roobois tea, while they loaded the bags on board the Federal Air plane.

And soon, we were off on our amazing Travelife adventure.

I’m not good with any kind of small and enclosed space.

But somehow, I was calm and happy on the flight even if I was slightly anxious at first. I think it helped that the crew was nice and the pilots certainly looked very professional.

I worked on my blog for most of the flight, but every so often I looked out the window in wonder and amazement at the vast expanse of nature below me.

We weren’t flying very high so it was possible to literally see a lot of Africa from the sky.

Finally we reached Sabi Sabi, and it was really a painless flight.

And when we got off the plane, our ranger Neil was there in a safari jeep to greet us and take us to the Selati Lodge, which was one of the two lodges we were going to stay at. 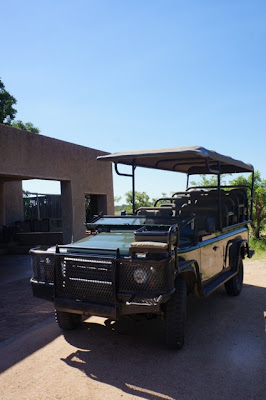 A HEADSTART ON THE ANIMALS

We weren’t even 10 minutes into the drive when already our safari began — or rather, literally got jumpstarted.

We saw a group of springbok on the field, jumping and playing around.

And then a little further afield, on a large plain, a wondrous sight greeted us.

A group of giraffes were literally having a lazy stroll in the park. I clicked away with my camera, admiring the elegance and gracefulness of the giraffes.

Sure, you can see them in a zoo. But it really was wonderful to see them in the wild, in their most natural habitat.

I said to Neil, our ranger for our stay at Selati Lodge: “Not bad, for our first 10 minutes.”

And Neil replied, with lots of confidence: “Don’t worry. A great adventure awaits.“

Indeed, we were so lucky.

We saw the Big Five we had come from so far to see, and much more, over six hours of game drives every day, for four wonderful and wondrous days in a never-ending, and never-endingly eventful Travelife.