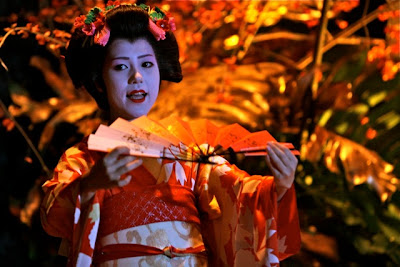 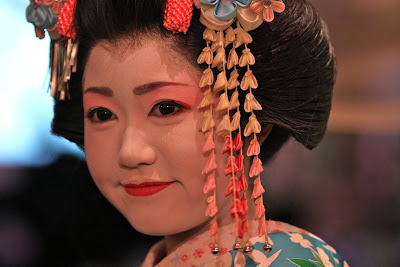 Last night really started at about 5 PM when I arrived at the Dusit Thani Manila for my appointment with Master Tani, the kimono sensei from Japan who was scheduled to dress me in a kimono for Travelife Japan Night tonight. The last time I got into a kimono was over ten years ago, when I had to be godmother at someone’s wedding, and I’d completely forgotten just how arduous wearing a kimono is. 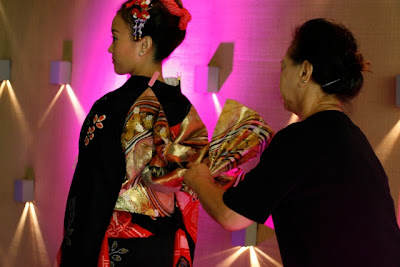 But yesterday, I was reminded of my experience, as I put on my PhP500,000 kimono — borrowed from the kimono sensei, of course, but hand carried to Manila just for Travelife Japan Night — and it took two people and over 90 minutes to get dressed. (Meanwhile for the Travelife lunch today, I put on a P250,000 kimono and it took me 45 minutes to get dressed. And no, I don’t know if there is a correlation between the price of the kimono and the time it takes to get dressed)
By the time I got out of the dressing room, it was close to 630 PM and people were starting to arrive for TRAVELIFE Japan Night.
THE ARTIST AT WORK 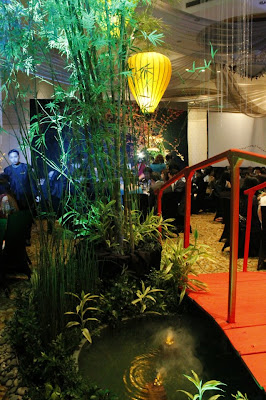 Beautiful settings by Pido Villanueva (A) 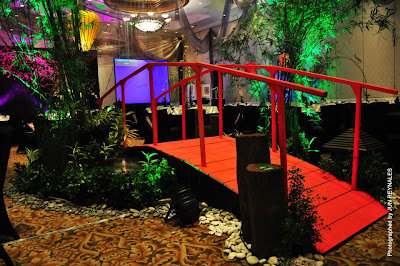 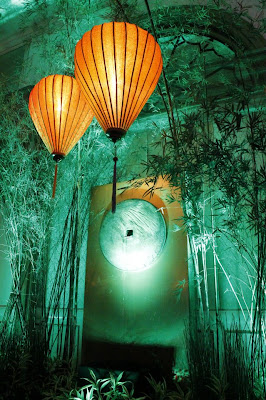 Beautiful settings by Pido Villanueva (A)
And what a sight beheld me when I finally entered the ballroom and the finishing touches were all in place. Events stylist Pido Villanueva, who had been working very hard on our “set” since midnight together with his team, had recreated a lovely sakura garden complete with fountains, ponds, lanterns and a proper Japanese bridge. 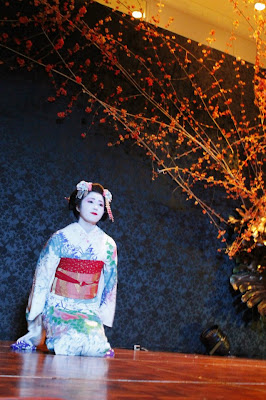 The maiko from Japan entertain the audience of 200 VIPs. (A)
The piece de resistance was the weepy cherry blossom tree right on the stage, just like what you see in Kyoto. It simply took everyone’s breath away, and even now I’m still getting texts from people who’d attended the event; they’re all saying that everything was so gorgeous.
AMAZING EVERYTHING 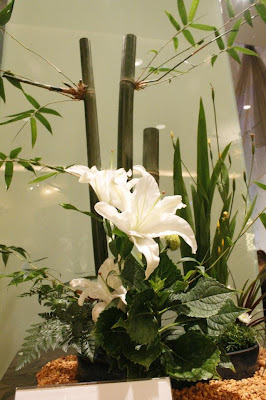 Beautiful flower arrangements all over the ballroom
from Ikebana International (A)
It was quite an amazing night, actually, with a very impressive audience of 200, fantastic food, and a spectacle of a cultural show featuring the dance numbers of the maiko, a koto performance, and a kimono dressing exhibition. Then the lovely ladies of Ikebana International pitched in by displaying their beautiful arrangements, and musicians from the University of the Philippines played the koto all evening — and these added more depth to the entire experience. 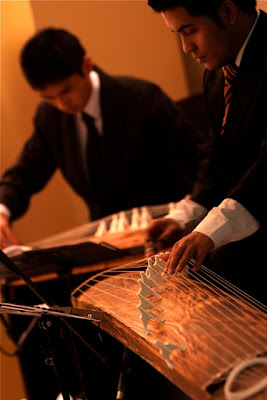 Koto players from U.P. (B)
EVERYONE’S AT TRAVELIFE JAPAN NIGHT
One of our first guests was Senator Edgardo Angara, fresh from the Senate. And after Japanese Ambassador Toshinao Urabe‘s welcome remarks, the honorable Secretary of Tourism Ramon Jimenez very kindly gave the opening address. 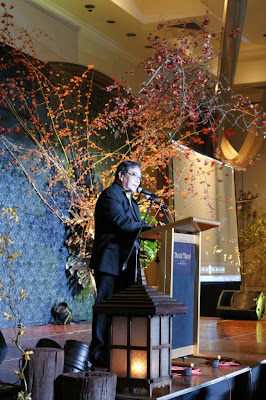 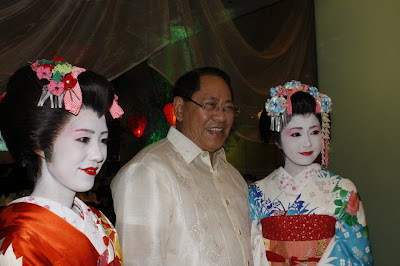 Senator Edgardo Angara was one of our first guests. (A) 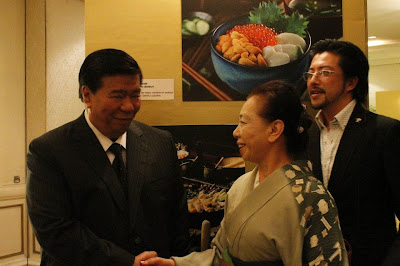 Senator Franklin Drilon enjoying himself at Travelife Japan Night. (A)
There were too many VIPs tonight to mention in particular, but I was very happy to see a lot of Travelife readers who are repeat attendees of our events and activities. Many of them had signed up even before the price was announced, confident that the cost would be reasonable and that they would get their money’s worth. Seeing them there and hearing their comments — many wanted to know what the next event would be — really made my day. 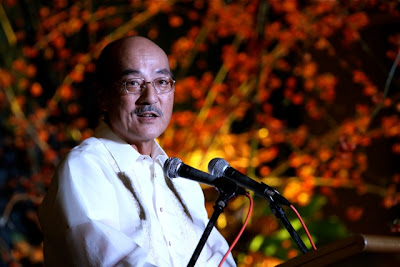 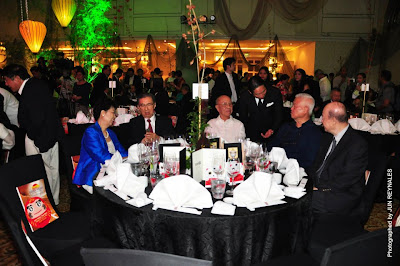 Former Secretary of Foreign Affairs and Madame Domingo Siazon,
Ambassador Alfonso Yuchengco and other VIPs
waiting for the start of the evening.
Meanwhile, I was severely constrained by the very large demand for this event so I was not able to invite very many friends. In fact, for a time, I was scheduled not to eat at all as I’d given up my place so that someone else could get a seat at Travelife Japan Night.
GIBO FOR A SEATMATE 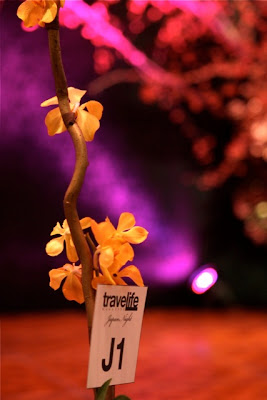 Travelife Japan Night had 5 VVIP tables (B)
At my table, I sat Gilbert Teodoro next to me and former President Fidel Ramos on the other side; and then I had the ambassadors of Indonesia and Israel at my table, together with their wives. I had other ambassadors as guests, as well, and I sat them at the next table with my good friends Dusit General Manager Prateek Kumar and Globe CEO Ernest Cu.

As host and organizer, I was running around all night. You know how it is when you’re the person throwing the party — you’re the last to enjoy it. So I’m afraid Gilbert Teodoro had an empty seat next to him quite a bit.
However, I did sit down long enough to enjoy a very scrumptious wagyu dish that was done so differently from the usual wagyu found in other fine dining Japanese restaurants: it was marinated for over 24 hours in mirin, sugar and white miso paste from Kyoto before it was cooked.
TRAVELIFE’S LUNCH AT UMU
Meanwhile, today was a very relaxing and personal lunch for Travelife Magazine readers and friends with our maiko. We had over 80 readers and friends, and everyone had a good time, I guess, because (again) we kept getting asked when the next Travelife event will be. We’re still recovering from this one so I don’t want to divulge the next event yet, but we’ll be at SMX this whole weekend for Travel Expo.
Do visit us at our booth at Travel Expo. We’re selling magazines and subscriptions at greatly reduced prices! Good night for now from all of us at Travelife Magazine. For once, we’re going to get a good night’s sleep. That is, if we can stop blogging now….
FOR THE SUCCESS OF TRAVELIFE JAPAN NIGHT,
THANK YOU TO:
OUR VALUED PARTNERS
The Embassy of Japan
The Dusit Thani Manila
OUR MAJOR SPONSORS
Japan Airlines (JAL)
Transnational Diversified Group (TDG)
Canon Corporation
Globe Platinum
OUR VALUED SPONSORS & PARTNERS
Toyota Motor Corporation
Pido Villanueva
Asian Food Channel (AFC)
Living Asia
105.10 FM
Businessworld
ACE Luggage/ Primer Group
Shiseido
Great Cuts by Angelo at Hotel Intercontinental
Photos by Maria Theresa Tomagos (A), Jeck Simbulan (B), Jun Reynales (C).
ON SALE EVERYWHERE NOW

1 thought on “Travel & Life: More fun in the Philippines”