Saying goodbye to the beautiful Sedov, the world’s most famous sailing ship

Tonight’s busy day began with organizing a family lunch at home, and then it ended with midnight tea at the Peninsula lobby, after a really fun private party at the Salon de Ning.

Salon de Ning was closed tonight for this party, attended by a very eclectic and posh crowd. Most people spent the night on the dance floor dancing to songs from the late 1980s, spun out by two very good bands and a DJ.

The last time I had this much fun at Salon de Ning was at the opening party just over two years ago. Champagne was flowing like water, the crowd was just the right mix of everyone in Manila, it was the start of the Christmas season so people were in the mood to party, and I went home at 530 AM. 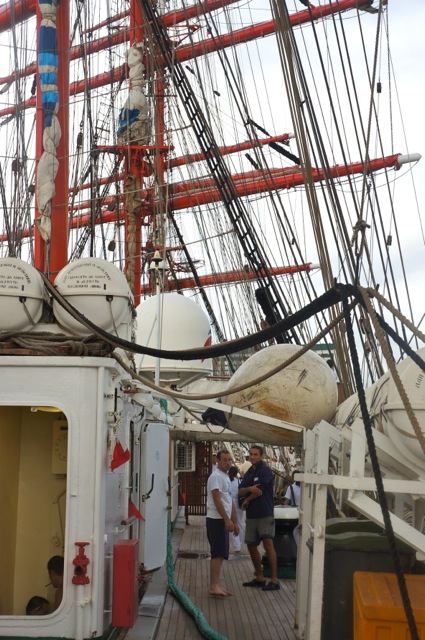 Tonight was another equally enjoyable all-night party — people are probably still there merrymaking as I type this out — but I had to call it a day a little earlier than usual, as I was completely exhausted by about 1030 PM.

But just as we were heading for the driveway, we’d decided to have tea at the Pen lobby. The lobby was jampacked on a Saturday night, but we were fortunate to snag the last table. 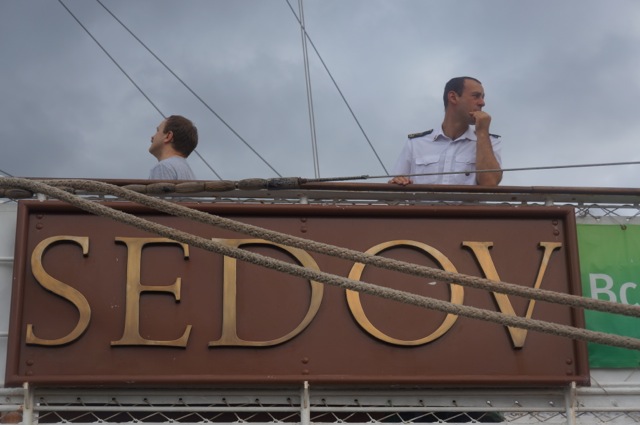 But lunch and tonight’s party are private events, so let me tell you instead about my afternoon spent on board the Sedov, the 91-year-old Russian ship that was docked off Manila Bay until 5 PM today. 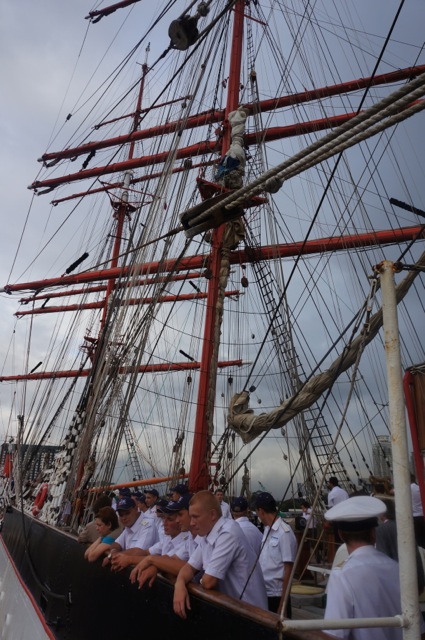 It’s the most famous sailing ship in the world, the oldest one still in operation, and it’s on a world voyage. Think about a very large sailboat that looks like a fantasty pirate ship from the 1920s, and that’s how the Sedov looks like.

It anchored in Manila on Thursday morning, right in the middle of its world voyage, and left for Khabarovsk today at 5 PM. From Khabarovsk, it’s working it’s way back to St. Petersburg via Asia, India, Africa and the Middle East. 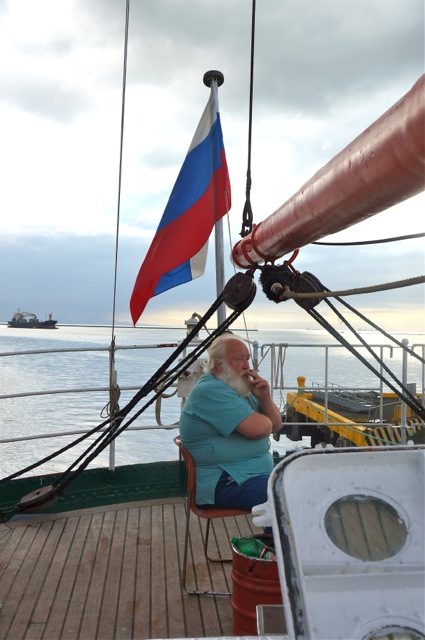 I looked at their route map earlier and it seems they’ll be docking in Cape Town in a few months. What a sight this ship will make, docking by the waterfront of Cape Town with the beautiful Table Mountain in the background.

FOR A COCKTAIL PARTY

I’d boarded this ship on Thursday night for an intimate cocktail hosted by the Ambassador of Russia and the Sedov’s captain. 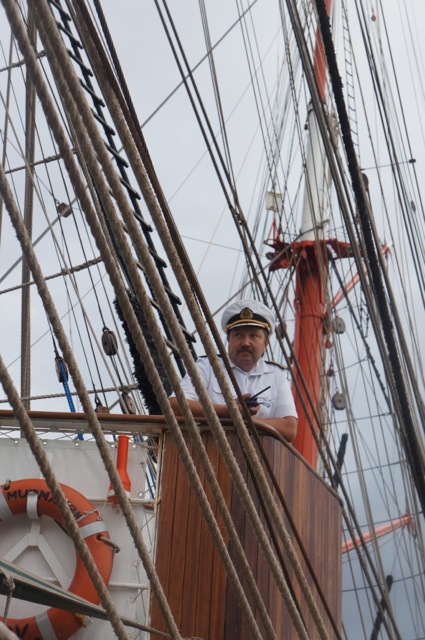 We all enjoyed drinks on deck on a perfect evening, and the small crowd included VP Jojo Binay, the Ambassador of China, select officials from the Department of Foreign Affairs, and the Travelife team. 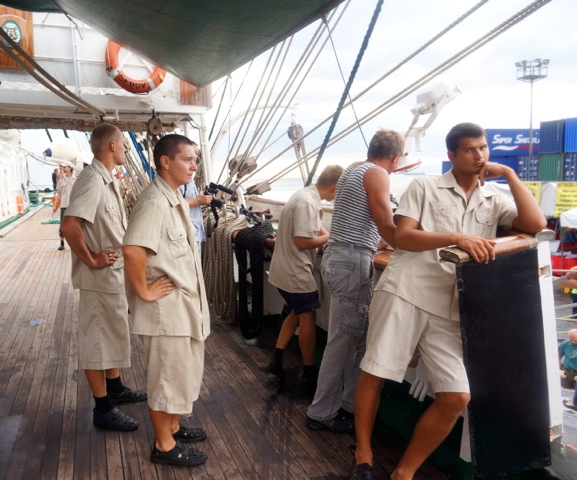 We at Travelife Magazine had been so enamoured by this truly amazing sea vessel that I asked the ship captain for another opportunity for a private visit for the Travelife team so that more staff members of Travelife and their families and friends could see the Serdov up close and personal. 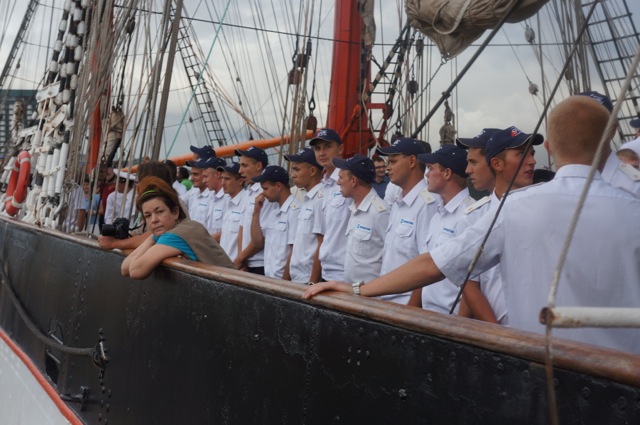 This was history and culture, and beauty of design. And an opportunity like this was not happening again anytime soon. 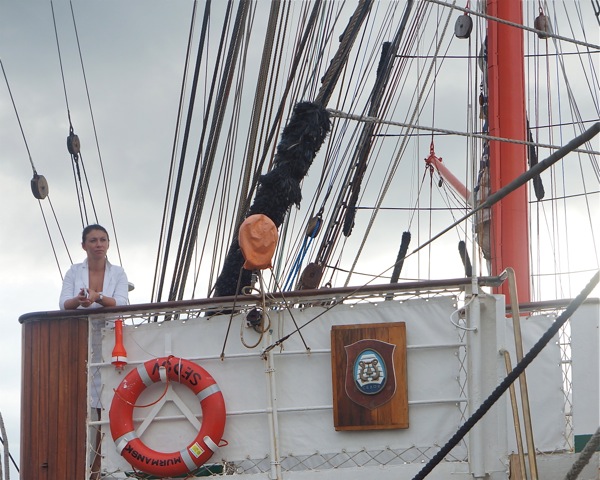 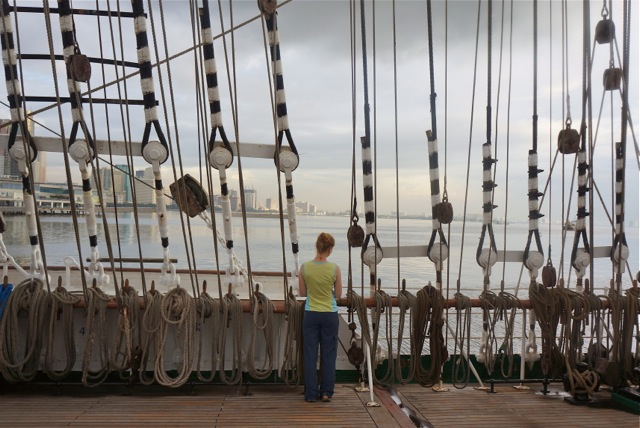 So today, the Travelife team boarded the ship at 4 PM, just an hour before the sailing time, together with the Ambassador of Russia and senior officials of the Russian embassy.

We were the only non-sailing guests on board the ship, and it was really nice to explore the ship in the day at leisure. 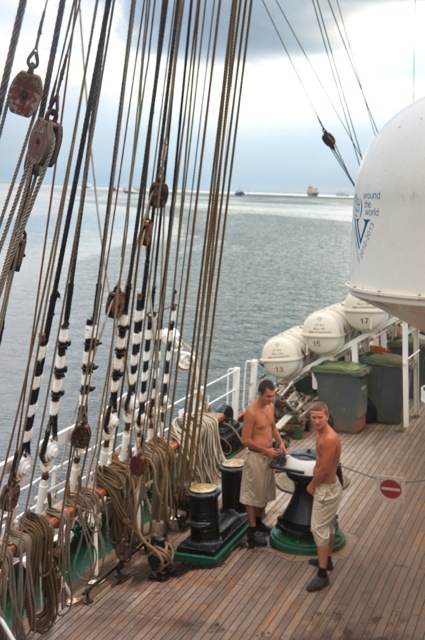 I’ve posted some photos here — mostly candid shots which I like to call “slices of real life.” A few seconds in a moment or in a life, that capture that moment so nicely. In this case, I think they capture some pretty magical moments in the life of the Sedov.

Then at 5 PM, the ship sailed off with much pomp and ceremony. 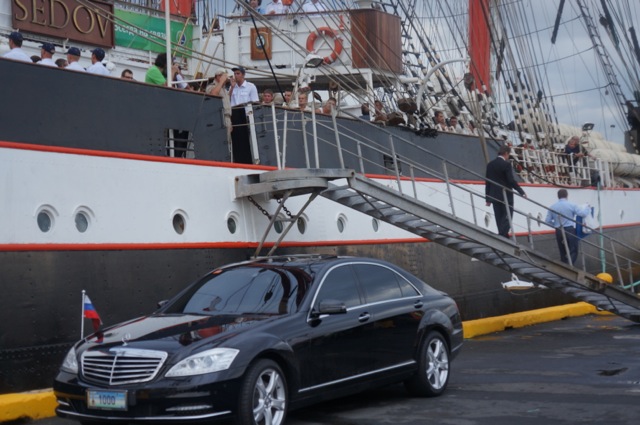 The weather was awful today, but it miraculously was clear and beautiful from the time we boarded the ship until the time the Serdov sailed off into the horizon.

And as it sailed, there was a mild sunset that gave it a romantic glow as it moved out of Manila. 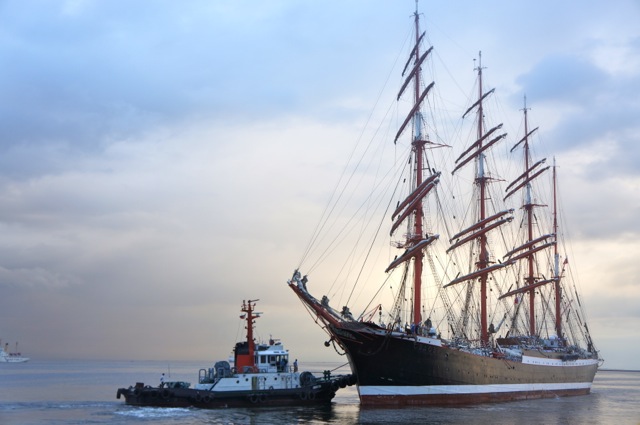 I didn’t expect to be moved by such a simple ceremony as the Serdov leaving Manila, especially as I’m on boats so much. 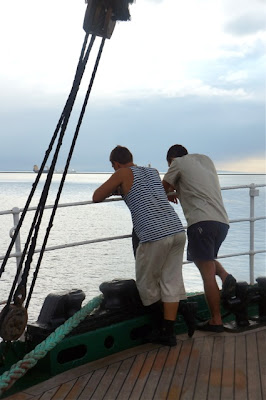 But somehow the silhouette of this beautiful boat against a picturesque sunset, with the Ambassador of Russia and the officials of the Russian Embassy, and us at Travelife Magazine, standing at the edge of the pier waving, made an emotional impression on me. 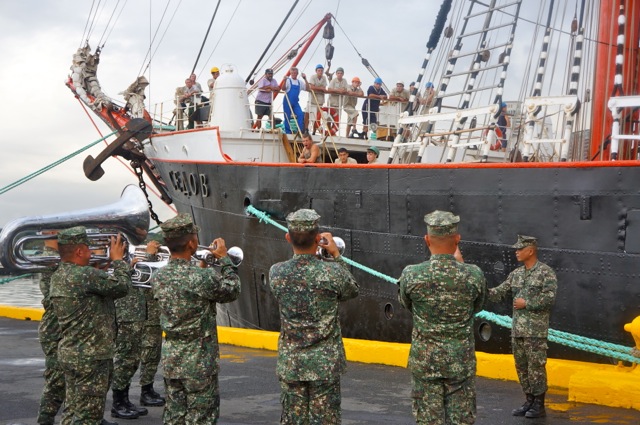 Long after the ship had sailed, I could still hear the haunting, lilting farewell song playing on the ship’s loudspeaker as it slowly moved out of sight, on another lovely afternoon in my never-ending, and never-endingly eventful Travelife.