Rules for women traveling solo in the Middle East 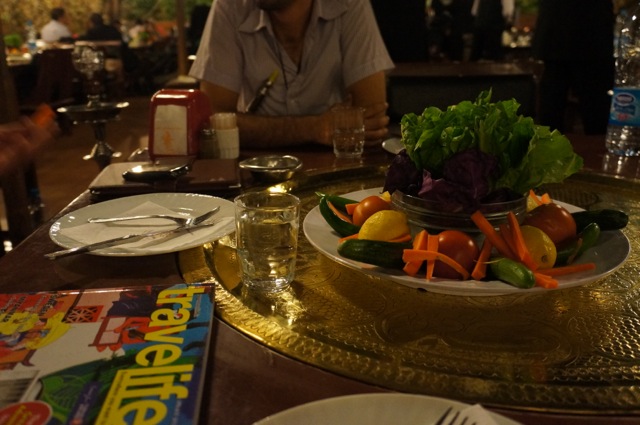 Last year, while I was on a short visit to Amman, living a Travelife, my friend Mr. Ayyad, who runs a travel agency specializing in high-end and quality tours around Jordan, invited me out for dinner with his team.
Scroll down to the end of this entry to get his contact details, in case you’re planning to visit Jordan… 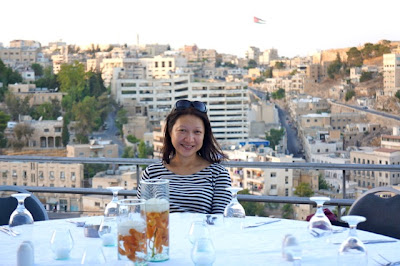 I was visiting Jordan by myself, you see, on the way to meet up with some people in Israel.

Mr. Ayyad thought I would like to experience more of authentic local life rather than more fancy hotel food again.

WHY THE MIDDLE EAST?
The Middle East is not exactly a place many women would travel by themselves in.
In fact, before leaving Manila, so many friends had asked me: “How can you visit the Middle East all by yourself?”
Well, for one thing, I travel by myself all the time, so I’m quite used it.

Although there are some places elsewhere that I’ll never sensibly go by myself. Africa, for example. 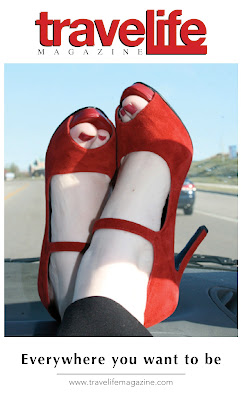 I hadn’t done a solo trip in a very long time because there’s been no shortage of good friends and decent company willing to join me in a Travelife.
But this time, it was very nice to just be by myself for a few days, for a change.
THE RULES FOR WOMEN TRAVELING ALONE
IN THE MIDDLE EAST 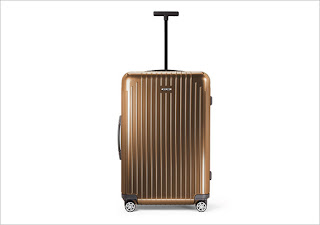 And if you’re female and solo-ing it anywhere in the Middle East, here are a couple of SOPs:
1) Stay in a good hotel.

2) Use a reliable travel agency recommended by someone you know, or by your hotel. And have them hand-hold you all the way, from arrival to departure.
Download the TRAVELIFE APP for PARIS for free now
Click here

People are so friendly in this part of the world, but this is not the place for a woman to be too adventurous or too friendly.
In most destinations, and especially in the Middle East, always get the hotel car to pick me up, even if this means spending more than what I would have shelled out for a taxi from the airport.
I also never go anywhere unescorted in these parts.

3) Dress appropriately. The weather may be darn hot, but I’ll never wear anything that would even be remotely considered as revealing if I’m in an Arabic country.
This is a conservative region, and long pants and dresses with sleeves and hemlines below the knee, at the very least are de rigeur.
For my dinner out in Amman, for example, I wore loose black slacks and a simple black top with long sleeves, made less austere by accessories. These blended in with everyone else.
You certainly don’t want to embarass your host by calling attention to yourself because of your clothes, in this part of the world. And you certainly don’t want to call attention to yourself either.
4) Don’t talk to strangers and don’t venture out at night without an escort.
5) Leave your valuables at home. Don’t display cameras, wallets and iPods conscpicuously.
Scroll down to read about a very local dinner in Amman… 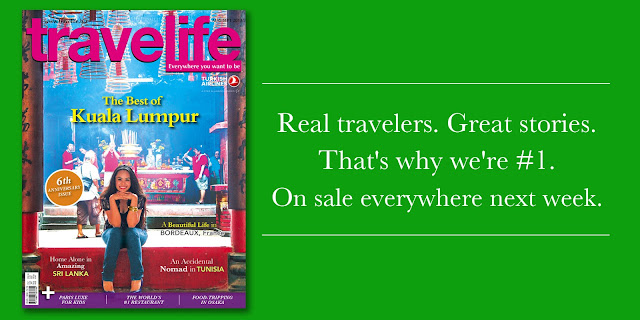 A LOCAL FAVORITE
Anyway, back to dinner.
We went to a very popular restaurant in the heart of Amman, with most of the tables crowded around a very large courtyard.
Almost all the tables were filled with locals, and each table had a massive built-in metal tray in the center. 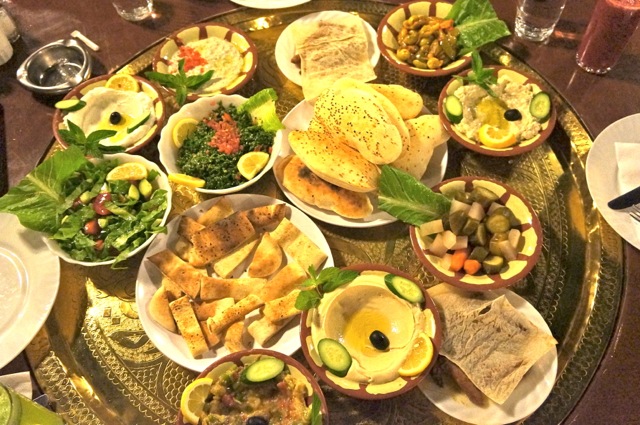 When I arrived, Mr. Ayyad was already seated and waiting for me, and the tray on our table was still empty.
But eventually it filled up with all kinds of appetizers — a typical Arabic mezze assortment of hot and cold dishes, with the requisite hummus and tahini, plus all kinds of salads, and a couple of hot foods like Arabic meatballs. 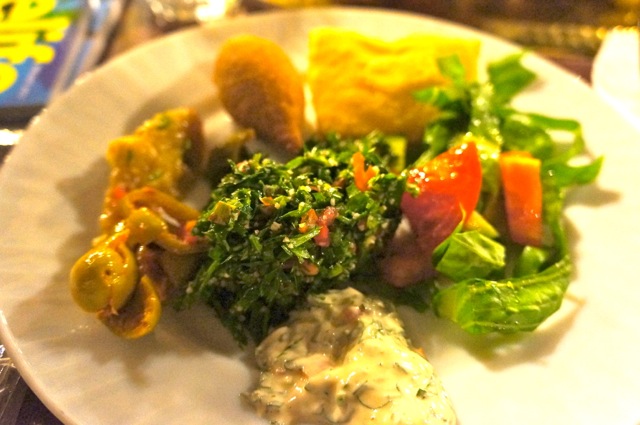 As the appetizer tray had both hot and cold foods, this could very well have been dinner.

But, no, a proper tray of meat dishes followed — mostly grilled meats accompanied by vegetables and fried potatoes. 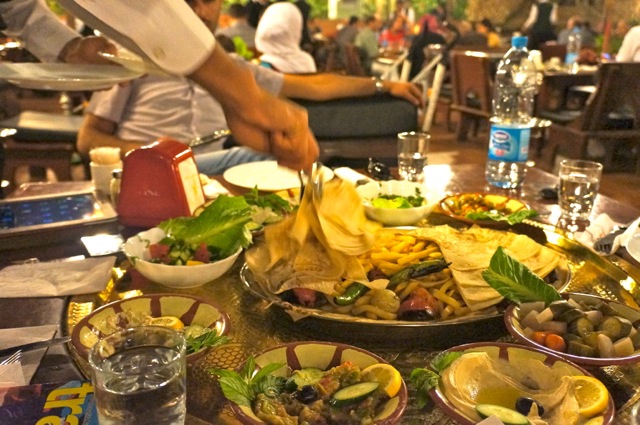 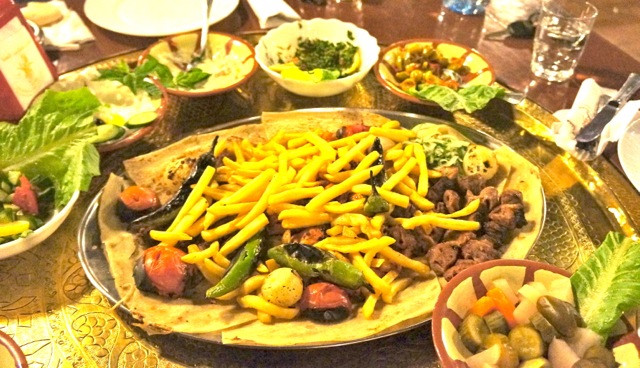 THE FRUITS AS A SHOW
And then we had dessert.
In this part of the world, it’s quite common to serve an assortment of fruits on a tray for dessert, and everyone simply picks what he or she wants from the tray.
As I was the guest, the waiter picked a juicy apple from the tray and ever so deftly peeled and quartered it with a fork and knife. That alone was a pretty good show. 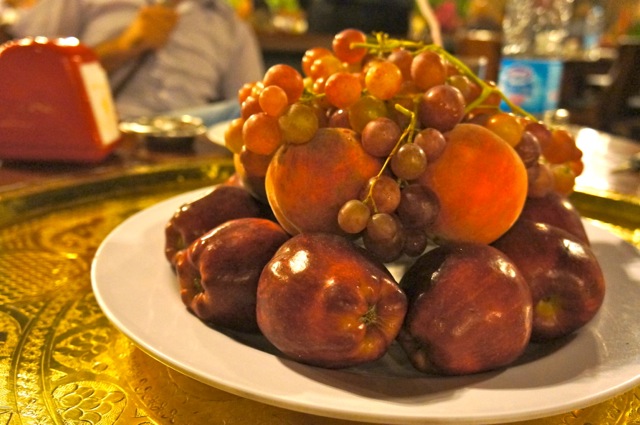 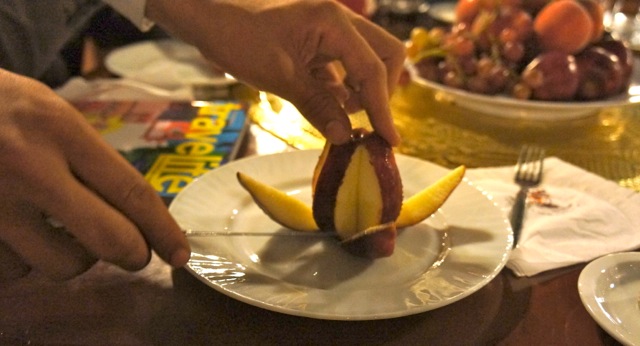 COFFEE, THE ARABIC WAY
Then a man in an Arabic dress came with a tall brass pot filled with Arabic coffee — which is different from Western coffee. It’s quite mild in taste and it’s usually not drunk with milk or sugar.
He gave everyone a bit of this coffee in little cups, and if you wanted more, you were supposed to hand the empty cup back to him for as many refills as you wanted. 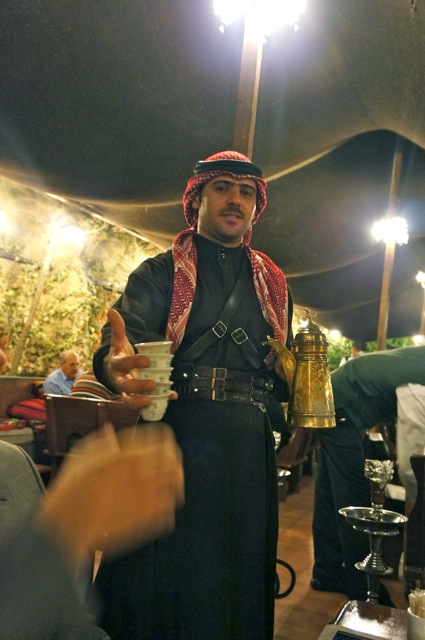 When you’re done with the coffee, you hand the cup back to him — but this time with a little jiggle to signify that you’re done.
SHISHA PIPES TO START AND END THE MEAL
And all throughout dinner, there were the de rigeur water pipes all around the table.
Two of the men smoked incessantly all evening.
They’d apparently picked their favorite fruit tobacco flavors — one was smoking watermelon, and the other was smoking apple, if I’m not mistaken — and these gave a sweet smell, but nevertheless a tobacco smell.
VIEWS FROM THE MIDDLE EAST 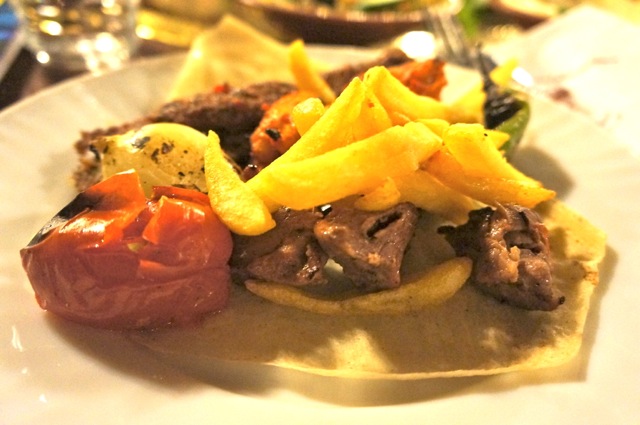 Dinner conversation was so enjoyable.
We discussed the practices of the Middle East and I learned a lot more about Arabic culture, and especially from a Jordanian point of view, which is generally a moderate Arabic viewpoint vis-a-vis some other Arab countries.
And then all too soon, it was back to my hotel, the Four Seasons Amman, for a good night’s sleep.
I planned to do the impossible the next day: visit  Petra and Wadi Rum in one day, and this entailed 14 hours or so on the road.
A happy evening and a long drive ahead, I thought, as my car sped back to the hotel.
But, at the same time, just another day in my never-ending, and never-endingly eventful Travelife.
Travelife Magazine has tried and tested this agency in Jordan:
ASHTAR TOURS
www.ashtartours.com