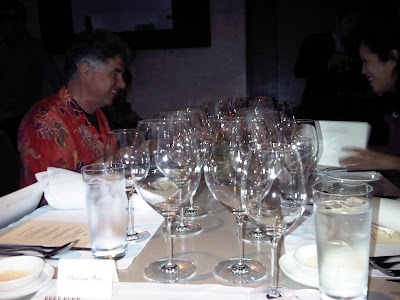 Good evening from Tokyo! It’s a chilly 5 degrees here but the weather is fine, and we had a pretty good flight over. Finally it was chillout time on the plane watching movies, after two weeks of hard work and non-stop merrymaking all the way until it was time to head for the airport. And now I’m in a car on the highway from the airport to the city, surfing the Net and blogging to pass the time. It’s an hour from Narita to central Tokyo. 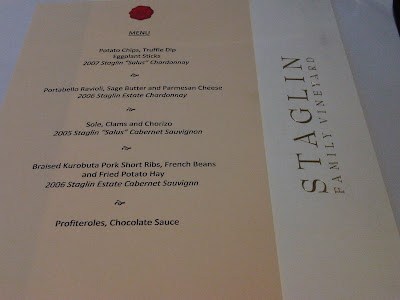 Talk about photo-finish in Manila today. We barely made it for our 230 PM JAL flight to Tokyo as we were still sitting down for lunch at Masseto in Salcedo Village at 1245 PM, enjoying chef Tippi Tambunting’s portabello ravioli with sage butter and parmesan cheese, with a glass of 2006 Staglin Estate Chardonnay, a straw-colored wine with aromas of citrus blossom, lemon zest and ripe pears. The wine was crisp, balanced and medium-bodied, with flavors of honeysuckle and candied lemon peel.

Lunch for the owners of Staglin Family Vineyards 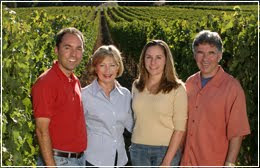 The ocassion was a lunch hosted by Jojo Madrid and Fred Uytengsu, two of the partners behind Premium Wines and Masseto, for Shari and Garen Staglin, owners of the Staglin Family Vineyards in Napa Valley and perhaps two of the nicest people in that part of the world. Staglin Family Vineyard is a family-owned organic winery that’s run on solar power, and Shari and Garen live on the estate in a rambling Italian-style villa. The wines they produce are in limited supply — they produce less than 9000 cases a year — but these are highly praised by the wine world. Robert Parker has this to say about Staglin’s Chardonnay: “Staglin Family Vineyard has become the pre-eminent estate winery in Rutherford, and their non-malolactic chardonnay continues to go from strength to strength.”

Shari and Garen were stopping over in Manila to touch base with their friends and customers, as part of a long tour of Asia that would end in India for a board meeting. I’d had the pleasure of meeting both of them before, on their first visit to Manila two years ago, when Premium Wines had organized an intimate dinner with wine lovers for them at a Greenbelt restaurant. At the very outset, they struck me as very warm and happy — I guess they love what they’re doing, and it certainly shows.

Well, today, I walked into Masseto all dressed for traveling to Tokyo sans my winter coat, to see Garen Staglin looking so relaxed in a Hawaiian shirt and Shari happily sporting a beautiful set of South Sea pearls that Fred’s wife Kerry had helped her pick out. Apparently Shari had had a marvelous time shopping in Manila. 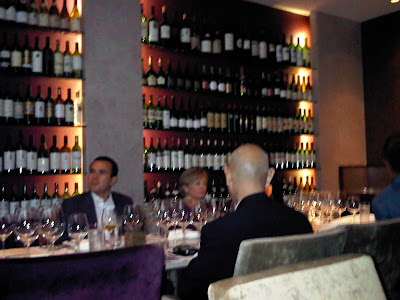 It was also very nice to see other friends joining the lunch, including Yvette Fernandez of Town & Country, who I knew from her New York days, and David Celdran of ABS-CBN. Christine Juett of Amanpulo also attended (“We’re opening a spa at Amanpulo,” she whispered to me), and so it was a great group of wine lovers at Masseto at lunch today.

The lunch started just before half past twelve and I knew I was asking for trouble regarding my 230 pm flight; but I just couldn’t resist staying for the first courses and tasting some of the wines. When I explained my predicament to Tippi, she very kindly offered to pack up the main course — braised kurobuta pork short ribs with french beans and fried potatoes — for me in a plastic lunch case, so that I could at least have a bite more in the car on the way to the airport. (She’s done this for me before, by the way; once I couldn’t join a lunch as I had to get back to work, and she packed me a freshly-ground hamburger which I’m still dreaming about even now. I’m planning to have it again when I return to Manila next week!) 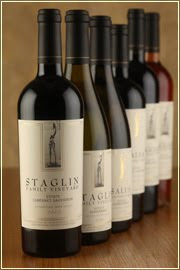 And just before I tiptoed out of Masseto, the excellent 2005 Staglin “Salus” Cabernet Sauvignon was served — so I took a sip to appreciate and then a large gulp to last me through lunch. This wine has aromas of blackcurrant, black cherry and plum, with a hint of eucalyptus and caraway. The result was a very happy ride to the airport, and just the right amount of buzz in my head as I tried to get checked in, and then made my way to the lounge for a much-needed glass of water.

Lunch at Masseto with Staglin wines and Tippi’s cooking was certainly a wonderful way to start a weekend of more good food in Tokyo. My only regret is that I didn’t ask Tippi to pack up some of her profiteroles for dessert — and in fact, I texted her about that from the airport.