Impressing a Hungry Traveler, a challenge for Chef Laudico of Bistro Filipino, and the best chocolate dessert in Manila. 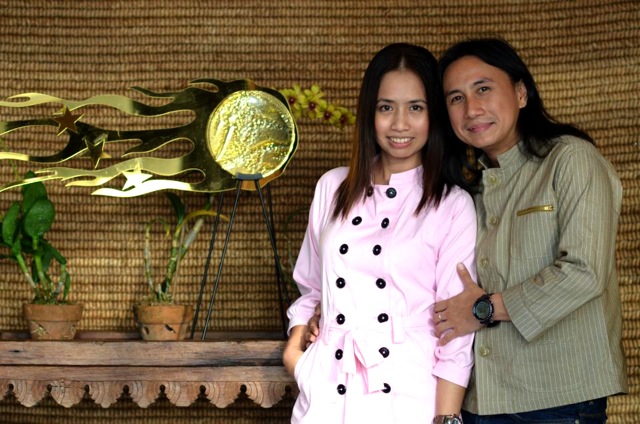 Last Thursday, in Manila living a Travelife, I had lunch with Filipino entrepreneur and Chef Roland Laudico and his wife Jackie, who is a dessert chef, at Bistro Filipino, their restaurant on the ground floor of the Net 2 Building in Fort Bonifacio.

I hadn’t been in a while and I’d been craving for Filipino food after traveling so much, so it was the perfect opportunity for comfort food. Or so I’d thought. 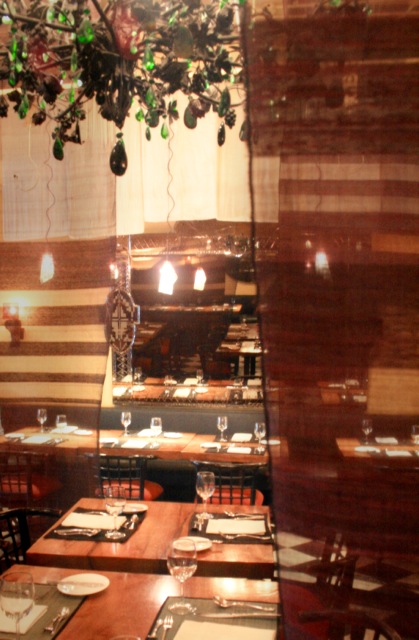 GET ME A KARE-KARE, QUICK

In fact, I was running late and I’d BBM-ed one of my friends who was already at the restaurant the following message: “If they have kare-kare, please order this for me…”

Yeah, I’m a kare-kare person, and until last Thursday, I can’t even remember when was the last time I’d had a really good one.

Fortunately they did have kare-kare on the menu. But, surprise, surprise. It was kare-kare like I’d never known it, with slow-roasted beef belly, just a smattering of sauce, and the bagoong actually incorporated already into the dish.

It was completely different from any kare-kare I’d had and it was pretty good. 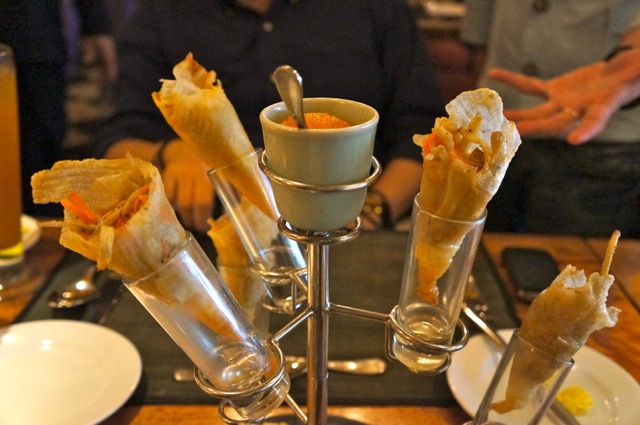 Anyway, lunch began with a slew of appetizers including lumpia and sisig. Again, all traditional favorites, but Chef Laudico dishes these up and serves these in a completely different way.

The sisig came in tiny glass cups, with half a quail egg at the bottom as a chaser, while the lumpia came in a crispy shell that you held with your hands and ate with a sorbet version of vinegar. As in frozen vinegar topping a hot lumpia in a crispy shell. You get the sensations…

Of course I knew that Chef Laudico likes to push the envelope and think out of the box, so I should’ve known we were not in for traditional Filipino fare like my grandmother used to make.

But in the years since I’d been here last, I think he’s refined his creative skills so much more and been able to create really interesting dishes out of basic favorite Philippine foods.

Going back to the lumpia, for example.


Pritong Lumpia is a familiar pedestrian food fare that we’re all familiar with. But here, freshly chopped vegetables are nestled in a cone-shaped wrapper which in itself is a conversation piece.

Add to more conversation is the frozen vinegar which you can generously toss in with so much ease to get that perfect lumpia taste. It’s the same familiar lumpia taste in an ingenious presentation. 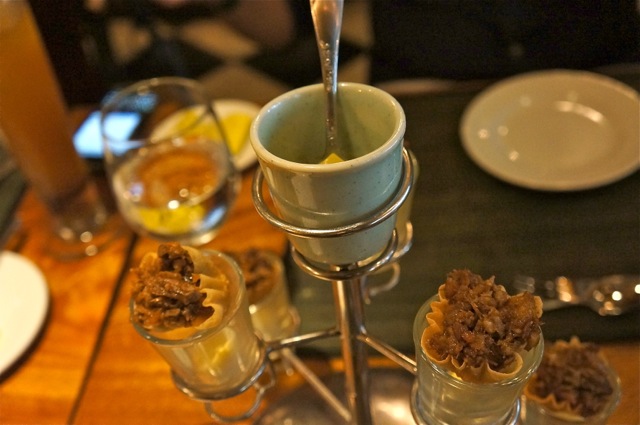 Then there’s the kare-kare I just mentioned. It’s served sans the clay pot (palayok), with the tender wagyu beef and ox tripe sitting magnificently on top of the whole dish. Again, you eat this in forkfulls—- meat, veggies, hint of sauce, with even the bagoong already in the mixture. and you’re up for a different kare-kare experience.

I had mine with an extra serving of sauce, though, as I’m really a sauce person.

MY PICK OF THE DAY

Everything was good but my favorite for that day — if I had to pick just one excluding dessert — was the  the adobo, which came with various cuts of pork (including delicious pork belly!) arranged so nicely on a platter with a sauce that was complex and delicious.

No need for extra rice as well as there was a version of sticky adobo rice underneath the meat. So again, you just scooped something out of the dish and got a spoonfull of everything in one go.

The piece de resistance, however, was Chef Jackie’s chocolate dessert. We were talking over lunch and she just happened to mention how a famous foodie had liked her molten chocolate dessert, and how this had made her very happy.

Of course, I just had to have it, after hearing about this molten chocolate dessert in this way. And wow. Was that good. I’d been trying to be very good about calories and all, but tasting this simply forced me to throw all my cares out of the window.

I ate all the chocolate dessert on the table — sorry for everyone else.

Chef Jackie’s chocolate dessert is actually made with the local tablea chocolate from Cebu. Can you imagine that?

Here was the best chocolate dessert I had ever tasted in Manila and it wasn’t made with Valrhona or some other fancy chocolate, but with local and very easily available tablea. That made this dessert even more special, as far as I was concerned.

I said to her: “I would come back here tomorrow just for this.” I liked the whole lunch, but I was wowed by this chocolate dessert. 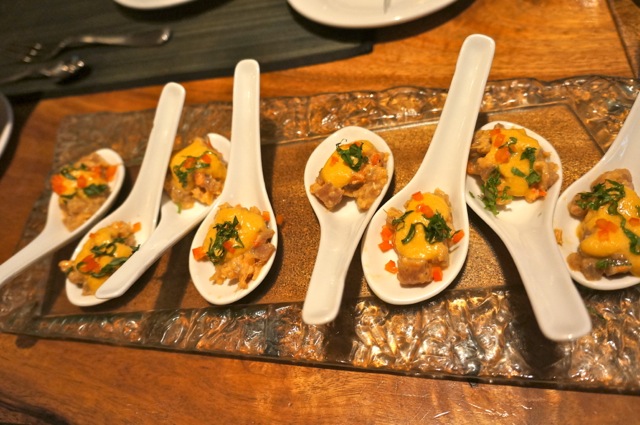 Then Chef Roland and I started talking more about food, and I happened to mention my foodie friend Jerome Velasco, who writes the Hungry Traveler column in Travelife Magazine. I’d been thinking of him because I’d just edited his next article in the car, on the way over to Bistro Filipino. 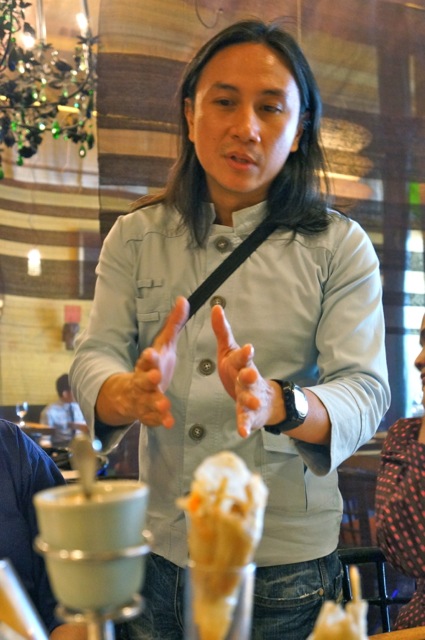 Jerome eats in the world’s best restaurants and writes about those places that impress him enough for him to take time out from what seems to be an incredibly and never-endingly busy schedule, to pen a 2000-word column for Travelife Magazine. 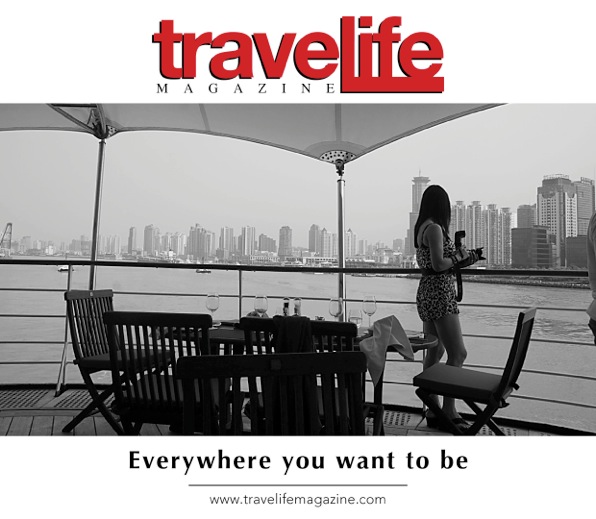 (SOME OF) THE SAME TASTES

We like a lot of the same restaurants even if our tastes are slightly different and he teases me that I like stuff with too much salt.

But not too long ago, we’d both eaten in a Michelin three-star restaurant with a very personable chef somewhere in the world and we’d both been so not impressed.

That’s never making it into Travelife Magazine, by the way, even with its three stars and all. We both can’t understand how that place got three stars…

Anyway, Jerome has never written about a Philippine restaurant in his column for Travelife, and I’d told Chef Roland about this. He was pretty intrigued.

TAKING CHANCES ON A CHALLENGE 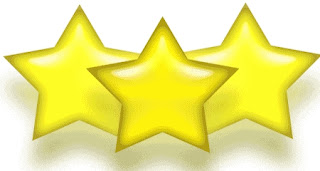 So I said: “If you’re up for the challenge, I can bring him here sometime to taste your food. If he likes it enough, he may write about it.”

But I had to add the caveat: “But if he doesn’t like it enough, no one in the world can force him to write about your restaurant.”

Chef Roland actually gave a big smile. He replied: “I like these kind of hard-to-please foodies, actually. They give me a real challenge because I realize that they really know their food so it makes me work harder to please them.”

IMPOSSIBLE, AND IMPOSSIBLE TO PLEASE

I smiled and said: “Well, this guy’s generally almost impossible to please.”

I’m not making this up, by the way.  Jerome had written as much about himself being “jaded and impossible” in his last article that I’d edited on my way to that lunch last Thursday. In fact, when I’d read it, I almost teasingly sent him a BBM right there and then to tell him that I couldn’t agree more.

But by then I’d reached Bistro Filipino and forgot about my BBM plans until writing this blog today.

UP FOR THE CHALLENGE 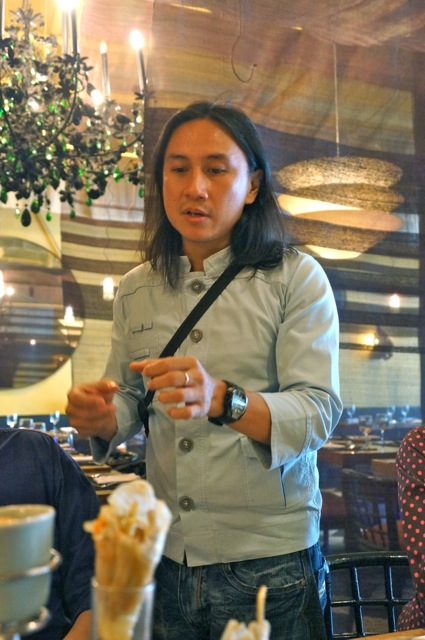 Chef Roland drew himself up and said: “I’m up for the challenge. Just name the day.”

Hope you’re having a wonderful weekend, wherever in the world you happen to be, from all of us at Travelife Magazine. The magazine created by real travelers with great stories.