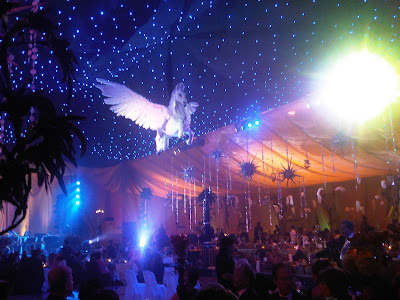 We just returned from another eventful evening in our interesting and cosmopolitan city. The night started out at the NBC Tent, where we dined under golden canopies and ornate decor as guests of the Ablaza family 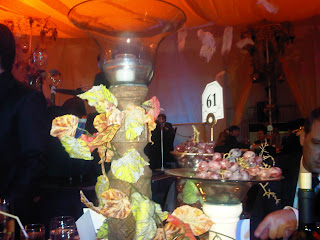 for their annual Christmas party and birthday celebration for matriarch Mellie Ablaza. The annual Ablaza party is quite famous now for its fantastic themes, amazing decor and great entertainment and many people look forward to it each year. This year was no different. Conceptualized as a Gods and Goddesses party, most of Manila society and not a few VIPs from the diplomatic circuit dressed up in goddess outfits (or at least evening gowns) and enjoyed a spectacular evening of dining and dancing with a winged white horse hanging from a starry ceiling.

What do people wear to a goddess party?

What’s a goddess outfit anyway? Many of the ladies chose standard white gowns, and not a few were in the typical one-shoulder goddess style and with stars and tiaras on their hair. Unfortunately, I didn’t exactly have a goddess outfit — but a white traditional Malaysian dress I bought in Kuala Lumpur some months back, with flowers painted on it, did the trick rather well, as far as I was concerned. 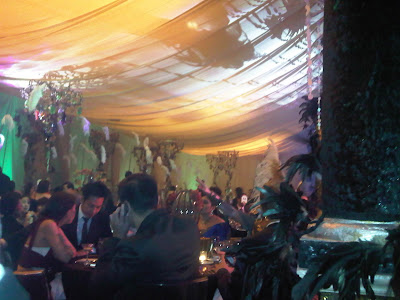 In the next table, though, I espied a lady wearing a wreath of gold snakes on top of her head, which made for an amazing sight and a great conversation topic. Seated nearby, too, were several ladies with lots of diamonds on their hair. Between all these ladies dressed up for a night in the Acropolis of Athens and the way the NBC tent was transformed into a Greek wonderland, making it unrecognizable as the same place where bazaars and product launches are held, it was a surrealistic scene like no other. And there was music, dancing and merrymaking all night. This certainly was a a form of travel, to escape out of the everyday into this fantasy world if only for a night. And what a fun way to kick-off the holiday season — with this grand party on December 1 to start the round of festivities with, literally, a party to top all parties.

A nightcap at the Pen 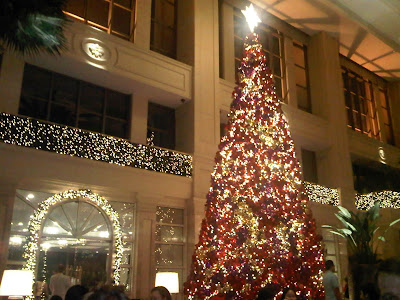 And afterwards, for a nightcap, a group of friends hied off to the Peninsula lobby for more chatter and drinks. We were just supposed to have a round of drinks, but somehow the spectacle of the Pen lobby all decked out very tastefully in holiday cheer with their giant Christmas tree in the middle, put us in a really festive and rather hungry mood. We ended up having a second dinner! We began simply with a bottle of champagne; but then the guys immediately ordered large steaks. Meanwhile, the ladies took their time with the menu. I was still trying to decide what to order when a friend said, “You know, I heard the kare-kare in Escolta (the all-day dining outlet of the Peninsula) is really good.”

Well, that was all the prodding I needed to order kare-kare. There was kare-kare in the lobby menu but I just had to have the one from Escolta brought to our table in the lobby. When it arrived, it was certainly different — all oxtail and no sauce, plus served with atchara! Quite a change from the usual kind, but refreshing and delicious all the same. 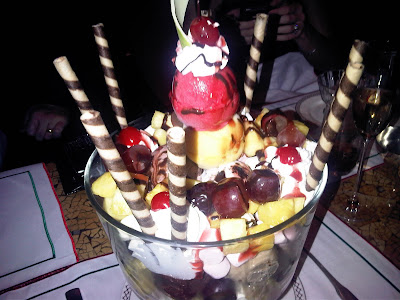 Pen Pals at the Pen Lobby

The biggest thing we tackled tonight came at the end. One of us had a craving for Pen Pals, the famous Peninsula lobby sundae.

“I haven’t had it in a long time,” she said. Well, I hadn’t had it at all. So we all got in the mood to share a Pen Pals for dessert between the six of us. And, wow, what a sundae it was. It had 19 scoops of ice cream and tons of cream and marshmallows. We all took large helpings — and I even had second and third helpings — but somehow it never made a dent to the sundae.

It did dent my calorie count for today, however, with two large dinners and this whopper of an ice cream sundae for dessert afterwards.

“It’s Christmas anyway,” I said to myself. And that’s an excuse I’m going to be using for the next three weeks.