Uncategorized
This afternoon, I flew out of Hong Kong after a pretty nice weekend, living a #Travelife, and landed in Thailand for a few days of serious detox.

How apt this was, too, after all the Michelin-starred meals we had in Hong Kong. We’d done nothing but eat and walk around the IFC Mall on the weekend.

Mr. X and I rode out to Hong Kong airport together as we were both flying out, albeit to different destinations, and his flight was just an hour earlier than mine.

So basically I hitched a ride with him in a pretty nice car.

A few minutes after leaving the hotel, Mr. X said to his driver, Mr. Chan: “Drop me off first at Terminal YY and then take her to Cathay Pacific.“

Until then, I’d been enjoying the scenery as we were just leaving Central and heading for the tunnel that connects Hong Kong island to Kowloon, and I was trying to figure out what had changed in Hong Kong’s landscape since I was last there.

There’s always something new being done in Hong Kong, you see.

In fact, just this morning, we were marvelling how the Star Ferry once used to be just two minutes from the Mandarin Oriental and literally across the post office in Central — and now it seemed to be a kilometre away.

If they keep moving the Star Ferry further out from Central, they probably won’t need the ferry service anymore in a few years. There will probably be a walkway across to Kowloon instead.

But, back to the drive to the airport this afternoon.

When I heard him tell the driver to take me to Cathay Pacific, I turned to him and said: “I’m taking Bangkok Airways actually.“

By then, he was already looking at emails on his Blackberry, even if it was a Sunday, so he didn’t even look up. But he said: “I didn’t know Bangkok Airways now flies between Hong Kong and Manila.“

Oops. Who said I was going to Manila?

This is when I said: “Didn’t I tell you? I’m flying to Koh Samui from here.“ 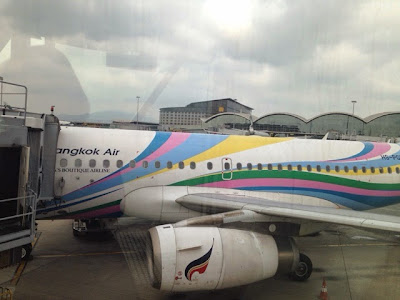 I’m sure I mentioned it in one of my emails to him before Hong Kong, but of course it hadn’t registered. Fortunately, all he said was: “Really? A spa again, I suppose?“

And then it was the fact that I was flying Bangkok Airways that actually got his attention.

He continued: “Hong Kong, Koh Samui. That’s probably going to be a small plane. I wonder if they’re even going to serve food.“ 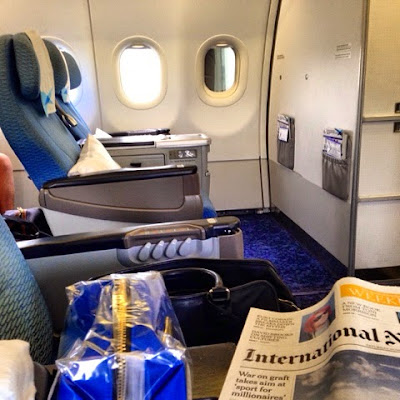 I shrugged. I was actually slightly uneasy about that same fact as I generally dislike small planes and I’d never ridden Bangkok Airways before today.

But it had been my only choice if I wanted a direct flight from Hong Kong to Koh Samui, saving time and bypassing Bangkok altogether.

And my Bangkok Airways experience is what you’ll read about next, in this blog on my never-ending, and never-endingly eventful #Travelife.