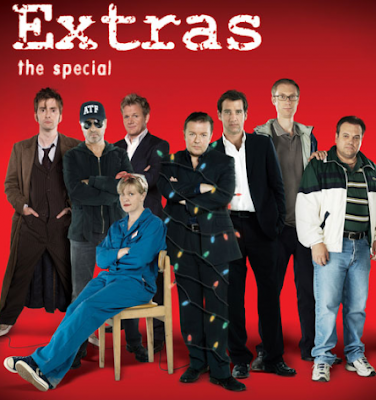 In Tokyo tonight, the discussion over dinner was about the BBC sitcom called Extras, which was created and starred in by Ricky Gervais, the creator of the original hit UK series The Office. I’d seen Seasons 1 & 2 of Extras when it first came out, buying it at a Virgin Megastore on a trip to London, and I’d enjoyed every single minute of it.

But recently, a friend had schlepped over to California for a few days and he’d finally bought me the Downton Abbey series I’d so been wanting to see, as well as the Christmas special and final episode of Extras, as he knew I liked Extras and think it’s a brilliant piece of work.
THE SUPERSTARS ARE THE EXTRAS 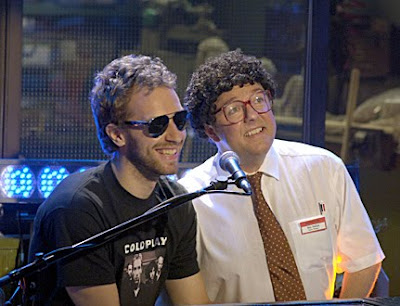 The concept is pretty good: top stars — mostly British performers although there are a couple of Americans who do cameos as well — star in Extras, but they’re literally the extras; the icing on the cake. The main performers are Ricky Gervais as the extra who gets a shot at the big time, and his C-team (instead of the ideal A-team) composed of a female best friend who’s quite lacking in brain cells, his hapless agent and Barry, a former famous actor who’s been down on his luck for years.
As we discussed it tonight, we agreed that the humor in Extras is very British; so if you’re familiar with British culture and the British way of life, you’ll find yourself in stitches throughout. But even if the UK isn’t your thing, you’ll find it funny enough all the same.

“I think people will like it, whether they understand English culture or not,” my friend said. But when I thought of all the nuances and scenarios that were so brilliant if you know the background, I had to disagree. Barry, the down-and-out actor, for instance, was the real-life star of a very big television show called East Enders many years back — so in a way, he was playing himself, although in a highly satirized version.
I don’t know if East Enders ever made it to our part of the world (although I’m sure it was a hit in Australia and NZ), but I’m almost sure there was not a single Londoner who didn’t know of the show at its height — although of course, lots of people who pride themselves in appreciating the finer things in life never admitted to watching the show.
But, again, if you know how big the show East Enders once was, you’ll appreciate better the depths to which the actor Barry fell, that he ended up doing roof repairs in pretty low neighborhoods and finally — although happily — selling mobile phones at the Carphone Warehouse, a discount retailer that is all over London. 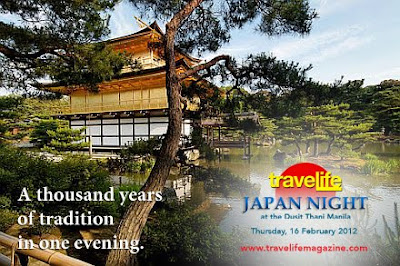 What’s universal about the Extras, I said tonight, is the fact that every single person in the world wants that big break that will change his or her life forever. Everyone is waiting and dreaming about it.
The tragedy here is not that there are too few breaks; but that when the break finally comes, some people are too un-clued in to realize or recognize it, while others throw their opportunities away and thus, the opportunity to change their life as well.
Extras is really a season full of laughs, but beneath the craziness of the stories are some undeniable truths: regardless of where you are in the food chain, life is generally shallow and it’s really up to you not to make it so; and everyone has their weaknesses, but it’s the way the weaknesses are managed that make some people different from the rest. 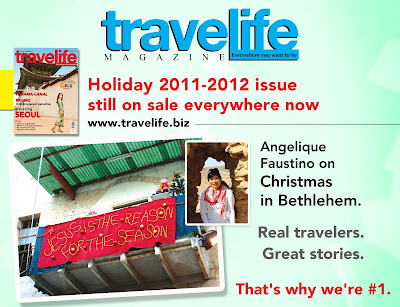 “KIRI GA NAI”
And to add: a good friend of mine when we were both living in Tokyo — I’ve returned to Manila and she’s long returned to the United States — used to always tell me that her husband never failed to remind her: “Kiri ga nai.” This basically means that no matter how hard you strive, there will always be someone better than you in some way; so it’s good to keep striving but it’s best to know when to stop thinking that the grass is always greener elsewhere. It’ll always be greener in some parts and browner in others. 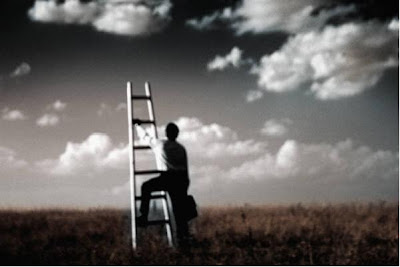 Everytime she mentioned this — she was a very ambitious lady and as far as I could see, she had everything anyone could ever want: brains, beauty, personality, pedigree, a picture-perfect family (you could literally use them for an ad), lots of friends and the kind of life most people only get to read about — I always thought to myself how ironic such a statement was coming from someone like her, to whom everything was given in amazing abundance.
Just some random thoughts on a pretty cold night in Tokyo, ensconced in one of my favorite hotels in this city for a weekend staycation. My home is only 10 minutes away but I can so live in this hotel.
* * *
JOINING HANDS FOR JAPAN
To commemorate the resilience of the Japanese people
one year after the Great Earthquake,
and to celebrate the beauty of Japanese culture.
DON’T MISS THIS AMAZING CULTURAL EVENT 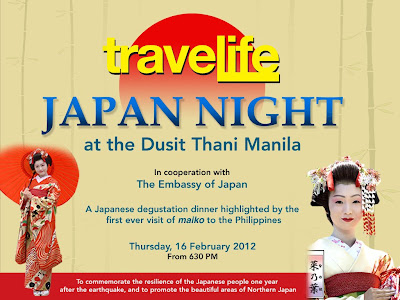 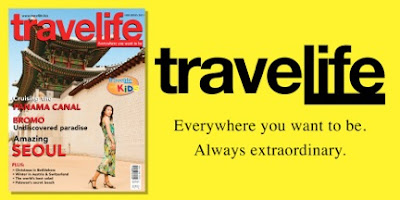