Delicious tapas and paella at Tapella, a speech at Standard Chartered Bank, and a reunion of our Prague group

Last night was one of the few times I truly felt exhausted in a never-ending Travelife. Nevertheless it was a very nice day and night that ended way past midnight.

Work aside, it began with a very long lunch of tapas and Spanish delicacies cooked by Chef Alexandra Cacho at the Tapella restaurant just in between Greenbelt 1 and Greenbelt 5. I went for a tapas degustation of sorts and I was expecting a 90-minute sort of lunch — and that stretched to way over two and a half hours. 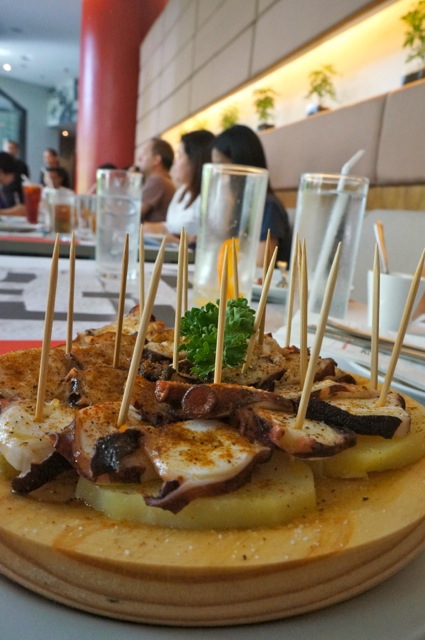 BACK IN SPAIN FOR A FEW HOURS 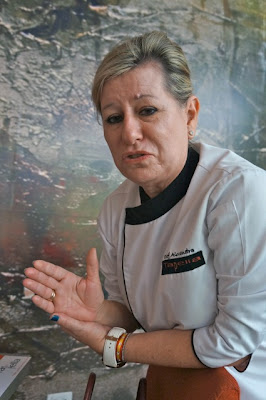 I told Chef Cacho, who incidentally hails from San Sebastian in Spain — the ultimate destination for many foodies from around the world because of the ratio of excellent retaurants (famous and not famous) per square kilometer — and counts Arzak as one of her neighbors: “This is one of the few times that I’ve felt that a meal in a Spanish restaurant in Manila has actually transported me back to Spain even for a few hours.”

The last time I was in Spain was last year, when I’d basically traveled along the coast of the Costa Del Sol as I made my way from Lisbon, Portugal to Barcelona over eights days or so. We’d stopped in many of the major destinations along that picturesque coast between Portugal and Barcelona, and at a couple of very fashionable islands, and I remember having some wonderful meals in every port. 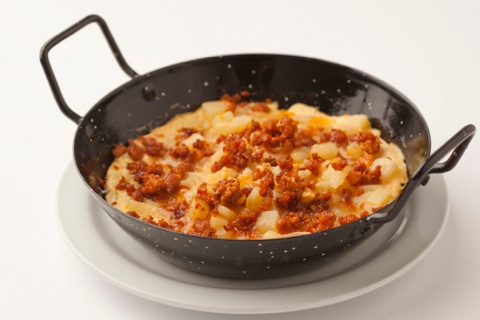 There are lots of Spanish restaurants in Manila, but many of them are either just stylish, trendy or adjusted to Filipino tastes and the commercial realities of operating a restaurant business. I hope that Tapella maintains this standard of cooking that I tasted this afternoon, because — truly — so many dishes were wonderful and certainly worth going back to Tapella for.

Everything was so beautifully plated as well, which is quite rare to find in Manila. Prices were quite reasonable as well considering the high quality of the ingredients and very good overall taste. 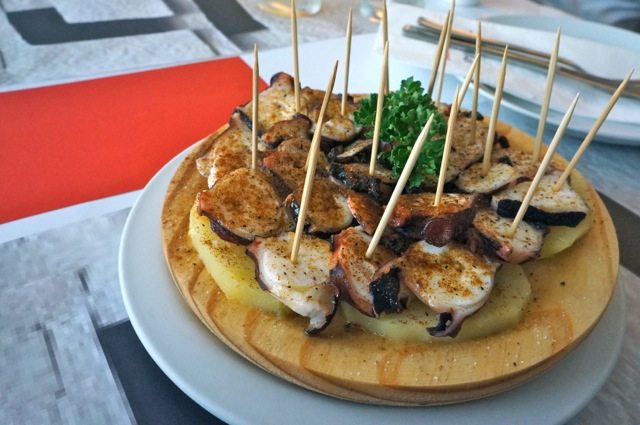 The pulpo a la Gallega we started lunch with was wonderful and gave an inkling of what was to come. I’d last had an excellent one at a nondescript bar in Malaga, and I’d been hankering for a repeat ever since.

This one I had today was pretty much near that — full of tender octopus drizzled with excellent extra virgin olive oil (yes, you can definitely taste the difference between the good stuff and the supermarket stuff) and very good paprika. We were four for lunch and I think I comandeered this plate in front of me. 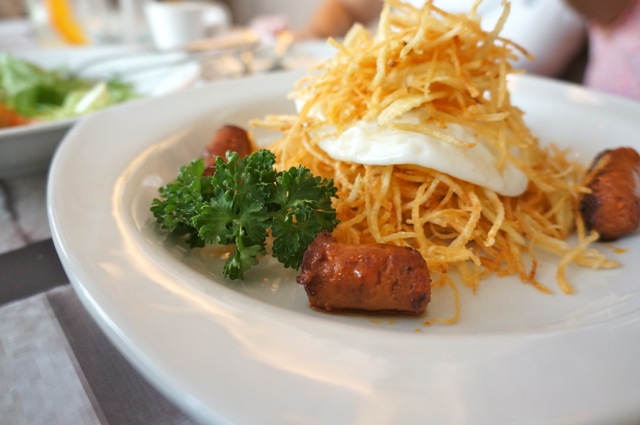 I also like the huevos estrallados con chistorra, a dish of cripsy friend potatoes with a egg in the middle and chorizo by the sides. As in Spain, you’re supposed to mix everything up and eat it in one spoonful so that you get a mixture of tastes, textures and sensations all in one. Very refreshing and delicious. 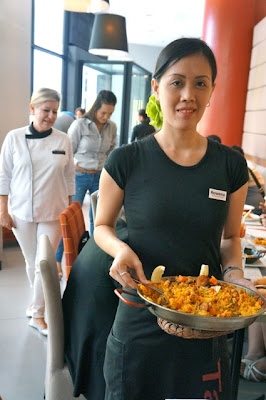 The main courses also stole my heart — and that’s not too easy to do. I liked Chef Cacho’s version of a paella as she does it the purist way by making it either all seafood or all viands of meat.

She rarely mixes meat and seafood unless a customer really requests it. Wow, the meat in this paella was so juicy and I would have eaten more, if I hadn’t already eaten enough till next Christmas. 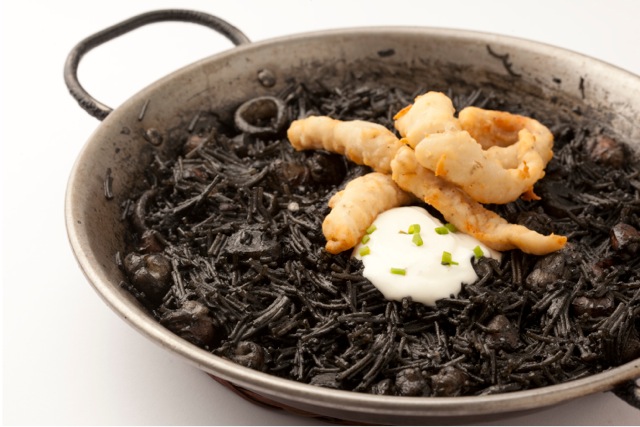 The fideua negra with aoili sauce was also absolutely scrumptious.

The piece de resistance, however, was the Rabo de Toro. This is a stewed oxtail stew which was so scrumptious I have no words to describe it. Wow. This was one of the best I’ve had in Manila. 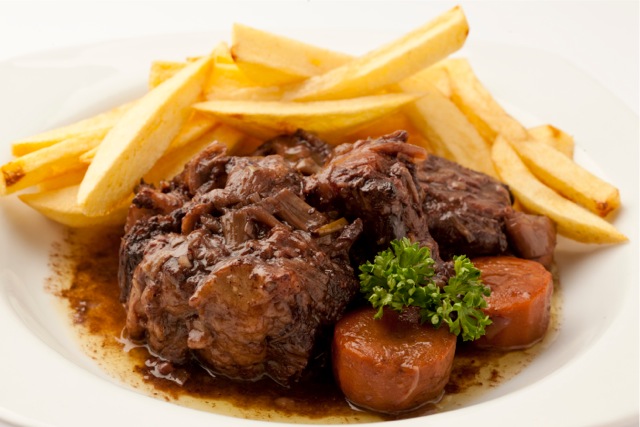 Just make sure to get the oxtail with lots of ligaments and fat as these parts of the oxtail — so delicious but so bad for you — can definitely make or break a dish. It made me feel like wanting to cook this dish for my guests the next time I actually have time to host a dinner somewhere in the world.

I was certainly inspired to try this out. But before that, I certainly want to go back to Tapella and get my fix of it on a day when I’m not thinking about a speech I have to make at night.

THE ART OF TRAVEL
WITH STANDARD CHARTERED BANK

Yes, that evening, I was the guest of Standard Chartered Priority Banking at an intimate gathering of their clients — an informal and fun event to talk about the Art of Travel, and of course they asked Travelife Magazine, the Philippines’ leading travel annd lifestyle publication to partner with them.

I did a speech for about an hour and I think everyone had an enjoyable time, judging from the heartwarming feedback I got afterwards.

Then, as you know, my Travelife is planned down to the second. I left the Standard Chartered event at just before eight as I was expecting guests at home for drinks. It was an impromptu reunion of our little group of Filipinos who had’d a very nice dinner at a restaurant in Prague last June since we’d coincidentally found ourselves in Prague at the same time.

We’d gotten together to catch up, talk about travel and plan our upcoming trip to Sri Lanka. Yes, they’ve all decided to join Travelife Magazine’s Sri Lanka tour, which is a tour for people who don’t usually take tours.

It was so enjoyable just sitting around and talking about everything under the sun, and when I next looked at the clock, it was way past midnight and I was slowly wilting from fatigue — one of the very few times I’d actually felt this way in a Travelife.

All in all a wonderful day and just another one in our never-endingly eventful Travelife.