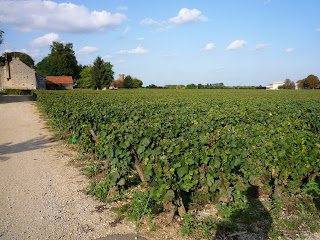 Last year in autumn, my husband and I holidayed in Burgundy, a mecca for lovers of the grape. Previously, we’d spent 10 wonderful days enjoying food and wine in Paris with good friends from Manila, Jojo & Fides; and when they returned home, we rented a car and drove down via the Champagne region and a tip of the Loire Valley towards Burgundy. 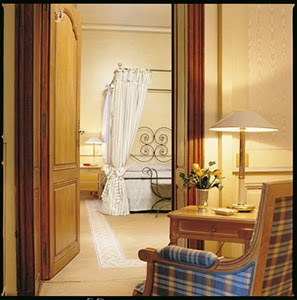 For our base to enjoy drives around this picturesque region, we chose the Chateau Andre Ziltener, a lovely chateau in the sleepy town of Chambolle Musigny, right in the middle of the Cote d’Or, along with some of the most famous vineyards in France, if not in the world. Run by Madame Doris Schwartz, an energetic and very hospitable lady, this four-star chateau has immaculately-done suites that have just the right amount of luxury so that you feel comfortable but still are able to appreciate the general simplicity of country life. Each suite is named after a famous Burgundy wine. We stayed in the pastel-colored Romanee-Conti suite, which had a living room with two doors that conveniently opened up to the garden and to the wood-panelled dining room where a Continental breakfast was served each morning. In Burgundy, we were eager, of course, to taste and delight in Burgundy’s many liquid bounties; but we also wanted to learn more about the life and people beyond the bottle. Luckily, we were able to arrange a schedule that wonderfully merged both. 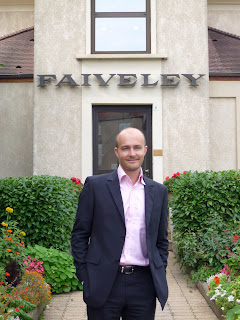 One day, we were invited to lunch by Erwan Faiveley, the young and aggressive seventh-generation winemaker of the prestigious Domaine Faiveley, founded in 1825 and one of the biggest domaine in Burgundy, in the nearby town of Nuits-Saint-Georges. We visited him at his sleekly designed headquarters, its wooden walls lined with modern art and framed family documents from the turn of the 20th century, the day before he was off to Paris to meet up with his girlfriend. After enjoying a few bottles of wine with him in his tasting room, we walked over to La Cabotte, his favorite restaurant — “my kitchen,” he called it. La Cabotte is a small establishment with a very modern theme in the very traditional town center, run by a young chef with tousled hair and a friendly demeanor who served us the day’s specials: a mean rack of lamb and an excellent lemon tart, which we washed down with a very good local red. He also had the most amazing modern decanter we had ever seen and all through lunch we couldn’t help wishing we had one. (Thankfully, on our return trip to Beaune, we passed by the wine curio shop Atheneum, and found this wonderful decanter there. We bought it, handcarried it to Tokyo and now it sits happily in our Manila home.) We then listened with fascination to Erwan’s description of the furious race for premium grape-growing space in this highly-coveted part of Burgundy, where the vineyards along east-facing slopes read like a who’s who of the wine world. Clos de Vougeot, Le Chambertin, Romanee Conti, and Geyvrey Chambertin, among others. The Faiveleys had been looking for extra land for years, but good ones rarely came on the market. But just then, Erwan was very pleased at having purchased a line of grapes – yes, literally, a single row of growing grape trees – in Burgundy’s equivalent of Forbes Park for grapes, for what seemed to me a shocking sum. Apparently, the going rate for good grape real estate in Burgundy, when you can actually get your hands on some, completely eclipses residential or commercial real estate, and makes prices in some major cities look very reasonable. “But we had to pay whatever the seller wanted,” Erwan recalled. “If we didn’t, someone else quickly would and that land would never come up for sale again.” 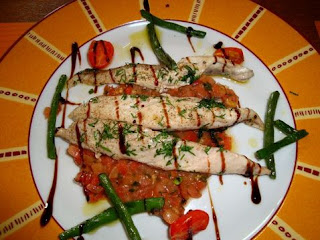 Then, we visited the the historic and beautiful wine trading town of Beaune where we had lunch at Ma Cuisine, an unpretentious little restaurant off the main square that is run by a livewire husband-and-wife team and is reportedly the best restaurant in Burgundy. It came highly recommended by two Manila wine buddies of my husband, Noel (a lawyer and avid wine blogger) and Vince, and so we definitely had to go. It was small and simple (more a cafeteria than a restaurant in feel), but definitely a winelover’s destination. The walls were lined with empty Burgundy bottles and the husband ran around taking orders while his wife worked in the kitchen. Happily, we were not disappointed with the food and the prices either. 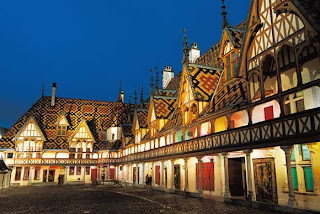 After lunch, we went on to the Hospices de Beaune museum, which is really Beaune’s main attraction. The Hospices de Beaune itself has been producing wine since 1459, and is world-famous for its annual wine auction in November participated in by aficionados from every continent. The museum itself is housed in one of the most beautiful buildings in one of France’s most picturesque towns (so you can imagine just how lovely it is), in a classic Burgundy style. Inside, they have impressive lifesized dioramas that show you how this institution began (as a hospital, and a pretty cool one for those times, actually) and how it began producing wine. After our visit, Roland Masse, the chief winemaker, took us for a private tasting at their wine facility outside town. While the Hospices de Beaune museum is a major tourist destination, few people ever get to see the actual winemaking facilities of the Hospices de Beaune so it was a real treat to actually visit their working cellar and drink straight out of their barrels. I remember passing a few empty bottles on a table by the entrance. When Monsieur Masse caught me looking at them (I was actually trying to see what vintage these were), he seemed to guess what I was thinking and said, “The staff just finished their lunch, but the bottles haven’t been cleared yet.” Of course. 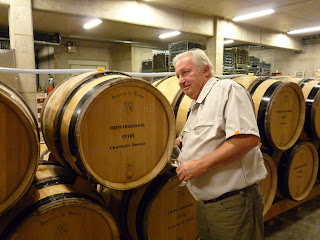 In the Hospices de Beaune cellars, we strode down each aisle and watched Monsieur Masse consider each barrel with a scratch or nod of his head. If he came upon a particularly good vintage of a grand cru or a premier cru, he opened the barrel and siphoned tasting portions into large glasses for us. 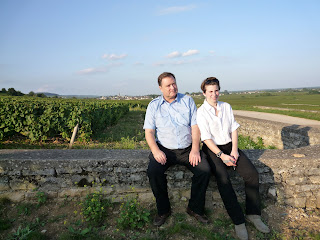 In the evening, we met Peter Vezan, one of France’s most respected wine brokers and tasters, and his assistant Elisabeth Villeminot, at Beaune’s train station. We frequently met up with them during our trips to Paris; and the last time before Burgundy was with Jojo and Fides. On one of our last evenings in Paris, the four of us went over to Elisabeth’s charming apartment on a very lively food street just halfway down the hill from Montmarte, and a wine-tasting session that began at 6 easily continued on to an impromptu dinner of salad, ris de veau (sweetbread) cooked by Peter, and fabulous cheeses from a fromagerie just down the street. Our dinner had a little bit of a hilarious aspect, as it was occasionally but very regularly interrupted by the pokings on the floorboards of Elisabeth’s cranky neighbor, who apparently objected to anyone having a good time without him. 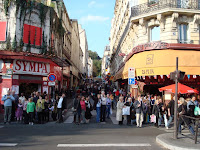 Nevertheless it was a wonderful evening which made me think: Here we were with some of France’s most knowledgeable winos, and we were drinking relatively cheap (but good) wine out of glasses that didn’t match — some of them would probably not even pass for wine glasses! –and mismatched crockery, but with lots of enthusiasm. But that’s life in France for you — unpretentious, joyful and natural. I couldn’t help but remember how wine is drunk in many (but thankfully, not all) chi-chi circles in Asia, including in Manila, where so much emphasis is on the label on the bottle and the quality of the wine glasses, and drinking wine has almost become a sport to see who has drunk more of what. Anyway, Peter and Elisabeth had traveled from Paris for business meetings in Burgundy and Peter had kindly offered to introduce us to boutique wineries in Burgundy, followed by dinner at one of his favorite restaurants in the village of Morey-St-Denis. Together, we visited wineries of all sizes, including one not much larger than the living room of an apartment and another run entirely by hardworking family members — the father operated the bottling machine, the mother was packing boxes, the sister was inspecting each filled bottle while her cousin nearby pasted labels on the bottles; and her brother — well, her brother happily dropped whatever he was doing to climb down into the cellar and open a few of their bottles for us. 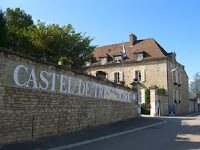 The highlight was dinner at a place we would never have found on our own – a lively restaurant patronized by locals with a serious tasting menu of heavy Burgundy specialties, and with a Japanese female sommelier to boot. We walked in laden with bags of half-drunk bottles from our many tastings and ready to eat and drink enough for a whole army. The meal lasted for hours, spiced by great conversation with good friends and wonderful wine – a most fitting end to three blissful weeks in France that we can’t wait to do again. This originally appeared in the September-October 2009 issue of Travelife Magazine. For more stories like this, get your copy of our latest issue at the nearest bookstore today.