Around the world with Travelife and TWG Tea 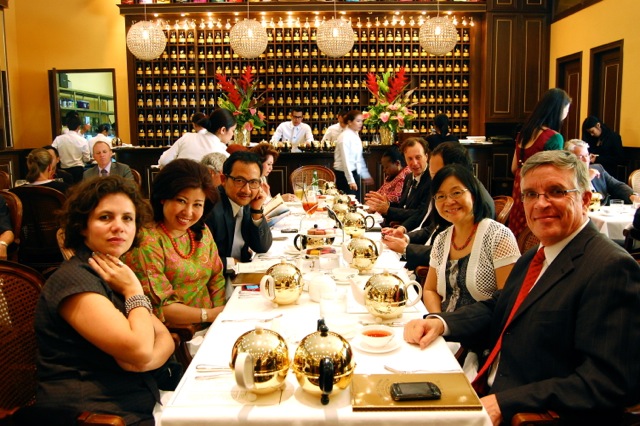 Sometime back, I decided to host a special luncheon party for some good friends in Manila, including 30 ambassadors and their spouses, and several expatriates.

There was really no particular occasion. I just thought it would be a good idea to invite everyone to the beautiful TWG Tea Salon at Resorts World, to talk about Travel and Life over a lunch paired with tea.

A TRAVELIFE AROUND THE WORLD WITH TWG TEA

The TWG Tea Salon at Resorts World has hundreds of wonderful teas, and many of them have such enticing names like “Weekend in Moscow” or “Weekend in Istanbul.”

I’m weekending in Osaka, by the way, as I write this; but I don’t think TWG has such a tea called “Weekend in Osaka.”

It also offers teas from pretty exotic destinations like the Cederburg Mountains of South Africa, the hills around Mandalay in Myanmar, and Shizuoka Prefecture of Japan.

When I first walked into the TWG Tea Salon in Resorts World, I thought to myself: “What a perfect setting for a Travelife lunch.”

I thought this from the outset because of the variety of teas on offer and the beautiful atmosphere of this particular TWG Tea Salon.

A NICE TRIP SOMEWHERE, EVEN FOR A FEW HOURS

Whenever I’m in this particular TWG outlet, I always feel as if I’ve gone on a trip, even just for several hours.

So, as far as I was concerned, the combination of this special atmosphere and TWG’s repertoire of teas was perfect: we could literally Travelife around the world with tea. And this is exactly what happened.

First, I created a three-course lunch consisting of TWG Tea Salon favorites: seafood chowder to start, and then a choice of lamb or the TWG salad as a main course, followed either by a chocolate tart or a poached pear for dessert.

Both dessert choices were accompanied by TWG’s famous and delicious ice creams.

Each course was paired with a delightful pot of tea, and we’d prepared an assortment of teas for guests to choose from.

It was truly a relaxing event, even for me as hostess, and a nice opportunity to see so many friends after having been away on a Travelife for so long.

Prior to this, I’d been in Japan, Vietnam, Thailand and India, you see, so I’d missed much of Manila for months. And then I was on my way to France, Turkey and Sri Lanka afterwards.

Of course, the talk over lunch was about the teas, and the travel memories they evoked.

I requested several close ambassador friends to share their thoughts and comments, including the Ambassadors of Australia, France, South Africa and Switzerland.

H.E. Gilles Garachon, the Ambassador of France, talked about the Burmese tea he had chosen for lunch, while H.E. Agnes Nyamande-Pitso shared her memories growing up with South Africa’s Rooibos tea – which incidentally is among my favorite teas in the world, as well.

When it was time to say goodbye, many guests told me smilingly: “What a nice and unique idea this was. I’ve never had a meal paired with teas before.”