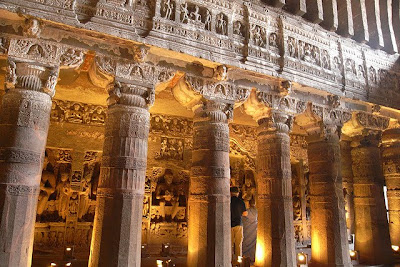 “We’re going to the ends of the earth,” I told myself, as our bus wound through narrow roads, barely evading a wooden vegetable cart and four people on a rickety bicycle. We’d left our luxury hotel, the Four Seasons Hotel in Mumbai, at an unspeakably early hour for a flight to Aurangabad, a sleepy little town at the end of the southern state of Maharastra, to which Mumbai also belongs.

From there we’d had breakfast, and then we’d boarded a bus for a long ride through fields and villages that our guide had brightly described as “some of India’s most authentic rural scenery.” It was nice, but it looked like so much of the rest of provincial Asia.

IMPATIENT FOR AN APPARITION
After three hours of interminable authentic rural scenery, I had grown impatient for my first glimpse of the famous Ajanta Caves, a cultural and artistic landmark whose existence is placed before the time of Christ. This was one of the things that we’d traveled halfway across Asia to see. And when I say “we,” I meant about a dozen women of all ages and inclinations, traveling from Manila and Cebu, brought together to India by a couple of mutual friends, a taste for adventure, and an endless amount of energy for shopping. 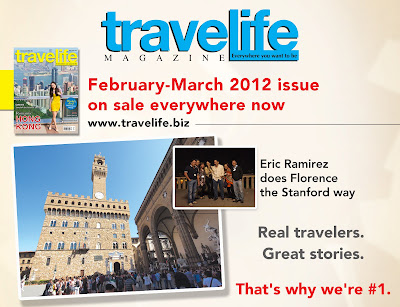 THE LAST STOP
We eventually reached the caves – or at least the very last possible place our bus could take us. It was ilke a bus depot with a few souvenir stores and snack restaurants.

From there, we navigated through dozens of eager vendors and a local version of a handicraft shopping mall to get on a shuttle bus that would take us from the public parking lot to another bus stop — from where we would hike upwards to the caves themselves. All this certainly required extra effort after an early start, hours of travel and searing heat.

But in hindsight, it made sense to protect the caves in every sense from easy access, as they have indeed retained their aura of majesty amidst this remote, undeveloped location. No one’s around, after all, so the entire site is far from touristy, save for the handicraft shops at the entrance. 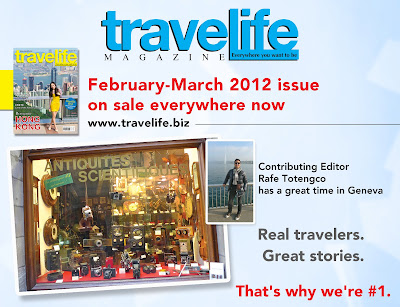 TIRED BUT EXCITED
One’s anticipation at finally seeing the caves is certainly heightened after such an arduous journey.

I was also tired. Not very admirably, I capitulated with the first group of men who offered me a roundtrip ride in a chair sedan for US$10. After alighting from the shuttle, we’d walked to the mountain base. There, we were told that the final leg would involve an upward climb under the noonday sun.

Our laments were stifled mid-groan, as groups of men miraculously appeared carrying colorful sedans – the kinds I’d imagined bearing the retinue of Maharajahs. “Five dollars one-way, ten dollars roundtrip,” they shouted to no one in particular, confident that some of us would take the bait.

Most of the other women — many of them older than me — had opted to make the climb to the caves in the heat; but I had decided that I was doing no such thing, and so I unreluctantly climbed into one of the chair sedans. Fatigue and sweat notwithstanding, I was lucky I’d decided to do the chair sedan route, because I was able to get my first glimpse of the Ajanta caves in a manner most ideal and authentic.

A MOST INCREDIBLE VIEW 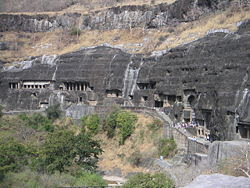 I was completely unprepared for the amazing experience of being borne on men’s shoulders and seeing the entire vista and the cave approach from a different, jaw-dropping perspective. I can vouch for the benefits of commanding the high ground, but no words can capture the awe-inspiring views of the approach to the Ajanta caves from on high. If you do reach the Ajanta caves, take my word for it and get yourself a sedan chair – not even to save your breath but to savor the experience to the hilt.
3D BEFORE THE TIME OF CHRIST
A UNESCO World Heritage Site, 30 of the Ajanta caves were carved out of a mountain range between 2 B.C. and 5 A.D. to create a habitat and place of worship for Buddhist monks. This fact, and the remote setting alone, already is majestic; but the real reason to see these caves are the intricate paintings and sculptures from the same period, located within. 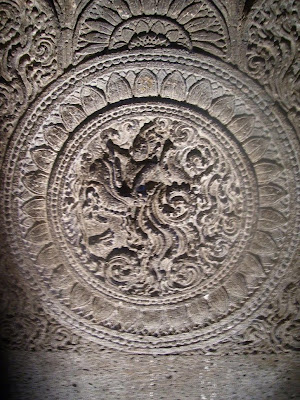 These paintings, sculptures and carvings, of largely religious themes, display dimension and perspective – making them unforgettably impressive, especially relative to the state-of-the-art (literally) elsewhere during these early times. These are also among the oldest evidences of mural art in India.
WAY AHEAD OF THE RENAISSANCE
“Perspective only came to Europe during the Renaissance,” our guide declared, not without pride in his voice. “But the Ajanta cave paintings were already full of perspective and dimensional painting centuries before that. We were way ahead of Europe in terms of art.” I looked around to see if there were any Italians within earshot, but we were the only tourists in the cave. 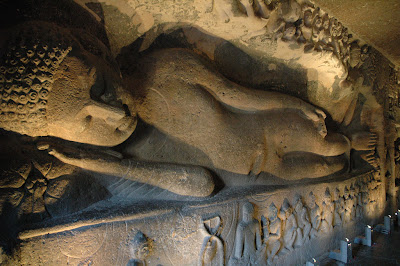 I could imagine the caves originally full of beautiful paintings. However, many of these were initially damaged by smoke from cooking and fires; and then further blurred by the elements over time, since the caves had no doors or protection except for the overgrowth of trees. Today, only a handful of the caves still have visible paintings and sculptures.

FRAGILE BUT STILL IN LIVING COLOR 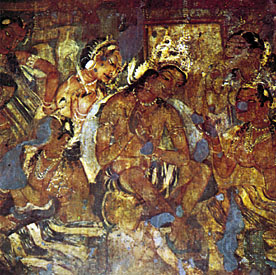 The art that remains, however, is still worth the journey, displaying elaborate carvings, reliefs, and scenes from the life of the Buddha and tales of rulers from that period. The interior lighting has been minimized to attempt to slow the decay, but even in the dimness, the intricate details are nevertheless clearly evident: people with shadows for dimension, and arrangements that indicate a skill for perspective. 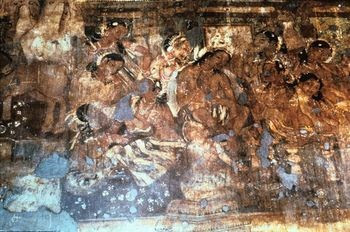 Historians believe that most of the craftsmen who worked on the Ajanta caves were Buddhist monks who painted in the dark with the use of torches and mirrors positioned to reflect the sun’s rays inwards. Paint materials were made from pebbles and vegetables found on the hillside, which were crushed and mixed with glue.

WHAT’S IN THE CAVES
Understandably the newer caves, created around 5 A.D, are the most impressive. Cave number 1 is among the most richly decorated. Some historians believe that the Vākāţaka king Harisena may have sponsored the décor of this cave since the artwork and craftsmanship here, including the elaborate murals that cover the walls and ceilings of the porch area, are among the most intricate found in Ajanta. 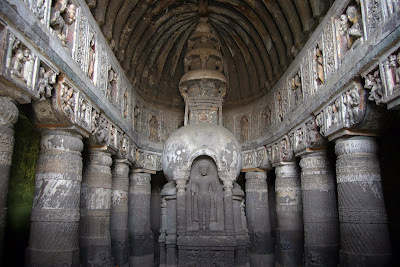 One of the middle caves, number 9, has fewer wall paintings but has a carved archway and a giant stupa. From the entrance, our guide bade us look out across the cave-lined ravine to the mountain ridge on the opposite side.

DATE WITH HISTORY
“Do you see that tallest point on the ridge?” he asked. “That’s the exact same spot from which a British army officer first spotted the caves on April 28, 1819.”

Captain John Smith, a British army officer, was out hunting tigers, when he spotted the tall arched entrance to cave number 9 from afar, barely visible beneath the jungle that had grown around it. “He would have missed the Ajanta caves completely, if he had not seen the top ridge of the entrance, which was obviously manmade,” the guide continued.
The caves had long been completely abandoned by the monks so nothing but their sculptures and art remained. Historians have dated the abandonment of the caves to around 480 AD and it is thought that they remained undisturbed for the next 1300 years until Captain Smith came along.
To commemorate his visit, Captain Smith penciled his name on one of the walls, still visible today on one of the columns on the right side of the cave. Faintly visible, it says John Smith April 1819.
Despite the ravages of time, encroaching jungle, and man, the Ajanta Caves and its superb artwork and mysterious, forgotten history still commands the power to amaze and inspire travelers seeking a wondrous merger of nature, art and the divine.
GETTING TO THE AJANTA CAVES
Aurangabad is the nearest major city and airport for the Ajanta caves. It can be reached from Delhi or Mumbai, although Mumbai is a shorter flight. The Taj Residences at Aurangabad is a comfortable, well-appointed hotel to use a base for sightseeing.
From Aurangabad, it is a three-hour drive to the caves. A visit to the Ajanta caves can also be combined with visiting the Ellora Caves, which many tourists combine in one day. However I recommend spending two days in Aurangabad for ample exploration, so that you can enjoy one day each at the Ajanta Caves and the Ellora Caves.
ON SALE EVERYWHERE NOW