A staycation at the best suite in the Philippines, at the Sofitel’s Imperial Suite

Between Christmas and New Year, Manila was a ghost town for me, with so many friends taking advantage of the long break and escaping to cooler climates or exotic locations.

As soon as work could reasonably be considered over around the third week of December, lots of people I know flew off to Europe, the States or Northeast Asia for a change of pace and atmosphere.

THE BEST PLACE TO BE

I love being in Manila during this same period, though, as the city is quiet and calm, and I can actually relax.

In a never-ending Travelife, where I’m on a plane, train or boat every two or three weeks, my idea of bliss is just to stay put in this little town.

But sometime just before Christmas, I hit upon a great idea. I wanted to stay in Manila, but I could do a mini-break and check into a nice hotel room, just for a change of pace and atmosphere.

There was only one place I really wanted to try, and this was the Imperial Suite of the Sofitel. I’d missed the party to launch these set of suites, you see, as I was on a Travelife to Europe when former Sofitel GM Goran Aleks hosted his party; and since then, lots of people have been talking about this suite but I’d never gotten a chance to try it out.

A WINDOW OF OPPORTUNITY

I had one little window to do so, as my schedule in Manila was pretty packed with dinners and lunches even if I’d deliberately stayed in town for some quiet time. On the 28th of December, I had the option to join someone’s dinner or do a staycation at the Sofitel, and I’d decided on the staycation.

Read us every Sunday in Business Mirror

Fortunately, the Imperial Suite was available for this exact date. It’s a pretty pricey suite, frankly, but for some reason it’s always booked so I was lucky that my dates matched the availability.

WORTH THE BUMP IN THE CREDIT CARD

And when I finally stayed in this suite, I realized why it’s incredibly popular even at this price point. It really is the most expensive suite in the country, but after you’ve stay here, you just want to take your credit card out and do it all over again.

It’s really an amazing suite, and definitely the most beautiful one in the country.

LESS STRESSFUL THAN A TYPICAL HOLIDAY

For certain people, too, a stay here makes fiscal sense if they’re thinking of a holiday with the family.

Just think. You’re going to spend less than what you would on a fancy family holiday somewhere outside of Manila. But, at the same time, you feel you’ve gone on holiday, and you don’t have jet lag, holiday crowds or airport mess to deal with either.

If you’re time poor like me, this is a great option. You can have a mini break for two or three days.

I would so do this again if I ever have the time and a good reason to do so. The Imperial Suite is at the top floor, at the very end of the hall.

When we walked in, our butler Robert and our waiter — the suite comes with two permanent staff who will deal with everything in your life from arranging spa appointments and making tea to welcoming your guests (when you’re staying here, trust me, you’ll suddenly want to invite everyone you know…) — welcomed us with drinks.

It was incredibly convenient and relaxing to have one’s own personal butler — so much so that I wished I could have a butler in my real life. 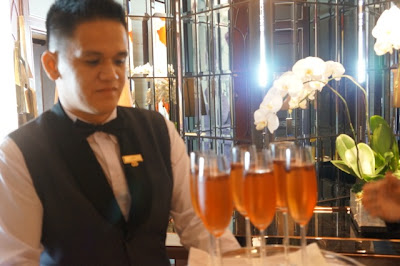 I’d brought some friends to come along and see the place and we’d had lunch at Spiral before heading for the suite. At Spiral, which was packed to capacity with diners, I even bumped into the eldest son of one of the Philippines’ most successful men. Actually, his father is supposedly one of the richest men in Asia.

“What are you doing here?” I asked him.

Of course he was there to eat, especially as I’d bumped into him by the Japanese food station, so in hindsight I actually don’t know why I asked him this silly question. But anyway he told me that he was working on that day and that he’d brought people from his office to Spiral for lunch.

Not too many big bosses were working on December 28, but obviously he was. In fact I know he works very hard and lives fairly simply, especially for someone who’s literally at the very top of the food chain. Now we know why he and his family are very successful. 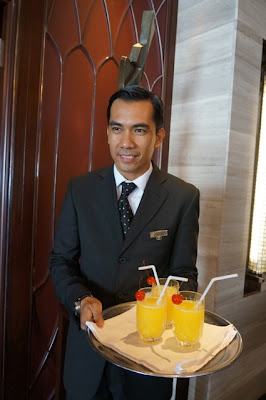 Back to the amazing Imperial Suite of the Sofitel.

My first impression was that it was just a really beautiful suite. Dark wood finishing isn’t really my thing, but for some reason, it looked perfectly in place in this suite. The details and artworks, too, provided the perfect accents.

Of course the wraparound views of Manila Bay and Roxas Boulevard were the wow factor. You just feel like you’re somewhere else, or at least somewhere incredibly relaxing, when you look out your window.

GUESS WHERE I AM? 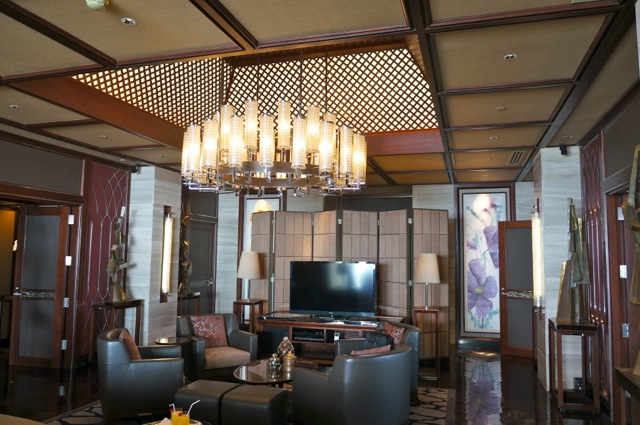 I just happened to be on BBM with someone holidaying somewhere pretty cold and damp and as usual I’d snapped a photo of the suite’s living room and sent it to him. I’d been sending him photos of half-eaten food and strange things over the holidays.

He messaged back: “Where are you?”

Then, instead of replying, I’d gone to the bedroom and snapped a view of the sea with the Coconut Palace in the foreground and the Manila Yacht Club in the background. I knew he’d get it in a flash after seeing this particular photo.

He messaged again: “You’re at the Philippine Plaza.”

I had to laugh when I read this. I was at the Sofitel, and the last time this hotel was called the Philippine Plaza was about two lifetimes ago. I almost sent him back a message saying something like “Your age is showing.“

But instead I just replied: “It’s been called the Sofitel for a really long time now.”

Of course I put a smiley face at the end. More on the gorgeous Imperial Suite of the Sofitel in my next blog entry.