Uncategorized
Yesterday at 745 AM, South Africa time, living a Travelife, I was in a car speeding towards Durban’s King Shaka International Airport, to catch the British Airways/ Commair 850 AM flight to Johannesburg.

This flight was going to connect with the 1230 PM Cathay Pacific flight from Johannesburg to Hong Kong.

DEPARTURE ON TIME, THIS TIME

It was about 90 minutes on an early morning via highway, from Fordoun, a luxury destination spa at the foot of the Drakensberg Mountains, to Durban’s airport.

Unfortunately, there was a traffic jam at the junction into Durban itself, and at 745 AM, I was still on the highway.

I asked my driver: “Are we near the airport?”

If you read this blog regularly, you’ll know that I’m very blase about airports and flights. But even this was a little too close for me, as I couldn’t even see any sign of the airport tower from the car.

My driver responded, with a big smile: “Very near, madam. Very near.”

Wow. That was a relief, I thought to myself.

At least I was feeling this way until I passed a sign that said: “King Shaka International Airport, 30 kms.”

TOO CLOSE FOR COMFORT

My flight was taking off in an hour and I was still 30 kms from the airport.

I’ve never missed a flight of my own accord in my life, in spite of the hundreds of flights I take in a year, and the equal number of times I cut it close to boarding time. When you spend as much time in airports as I do, you see, you’ll want to spend as little time waiting for your flight as possible.

But I really did think I was going to finally miss one this time.

THE REAL FLIGHT I COULD NOT MISS

Of course, the clincher was not really missing the flight to Johannesburg, as there are probably lots of flights between Durban and Joburg.

It was missing the Cathay Pacific flight to Hong Kong from Johannesburg, which only happens once a day.

If I missed this, the next flight would be in 24 hours.

AN EXTRA DAY WOULD HAVE BEEN NICE

Unfortunately, I had a ton of work waiting in Manila before I flew out again on a holiday to Morocco.

Yes, I’m off to Morocco for another holiday pretty soon — and I have so much to finish before getting back on that plane. I even had to cancel plans to spend a week in Japan from this weekend, as I’m swamped with work. 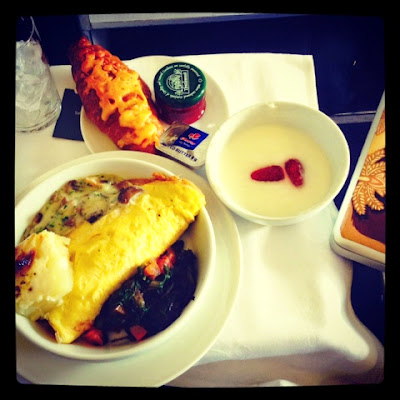 I quickly did the maths for times and kilometers driven, and nothing at all happily added up.

So I resigned myself to missing my flight. Then I picked up the phone and asked my staff in Asia to start checking options out of Durban and options out of Johannesburg. I’ve never asked them to do this before, but I did so yesterday.

But — what do you know. It was my lucky day.

WOW. I ACTUALLY MADE IT.

Against every conceivable odd, I made it to the airport about 30 minutes to departure.

The great staff at Commair put me on the flight and tagged my bags all the way to Asia.

I ended up walking straight to my front row seat in the plane from the check-in counter without even a glance at the shops or a stop at the lounge.

This has to be my personal record for the least possible time spent at an airport yet, in my never-ending, and never-endingly eventful Travelife.

Good night finally, from Manila, after attending a restaurant opening and a dance performance two hours after touching down from a 30-hour journey.